View source
watch 02:34
Fire Emblem Warriors: Three Hopes - The Loop
Do you like this video?
Play Sound
This article is about the Acid Mushroom. You may be looking for the Deep Shroom.

Acid Mushrooms are a hazardous species of flora. They are used as a raw material to manufacture Batteries.

The player can pick them by hand. The player can also strike one with a Survival Knife to kill it and collect four Acid Mushroom Spores, which releases acid into the water that can cause damage to the player, structures, and nearby fauna and flora.

The Acid Mushroom and its spores can be planted in an Exterior Growbed or an Alien Containment.

Acid Mushrooms appear as stout purple-colored mushrooms growing on the seabed. There are two variations of Acid Mushrooms: a small one with a purple hue, and a larger one with a bright magenta cap and the rest of it fading to a dull violet color. Both variants emit faint Bioluminescence at night, like most fauna and flora.

As a defense mechanism, the Acid Mushroom has the ability to burst open and release acid when damaged, harming the player and destroying itself in the process. Vehicles like the Seamoth can also take heavy damage from ramming into or colliding with Acid Mushrooms. An Acid Mushroom's blast may also damage other Acid Mushrooms in close proximity, possibly causing a chain reaction that can deal heavy damage to the player, structures and vehicles if multiple Acid Mushrooms in a cluster are destroyed without the proper precautions.

For maximum caution, the best strategy is to pick up all nearby mushrooms before knifing a mushroom for its spores. Each mushroom drops four spores, so the player can pick three mushrooms and collect spores from the fourth to restock their mushroom supply.

A cluster of Acid Mushrooms 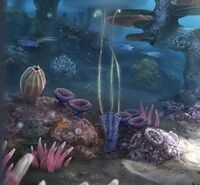 Acid Mushrooms in the Concept Art for the Safe Shallows