You may append your seed code to my species designation. Please call me AL-AN.

Al-An, also referred to as Alan, is a member of the The Architects who is present as a character in Subnautica: Below Zero.

When Kharaa (Khar-a) broke out, Al-An's mind was stored away, while his architect body was destroyed. Al-An appears to be unique in that his mind has remained conscious unlike other stored minds which are in a dormant state.

Al-An, like the rest of his species, had his consciousness uploaded to a Data Hub. His physical body was likely disposed of afterwards, although for an unexplained reason, Al-An's mind remained intact, capable of thought and speech, unlike the other Architects encountered in The Crater. This might be explained by the fact that Al-An was the project leader of the Kharaa's research team, giving him access to a better storage technology. At some point in time, he sent a distress signal to Marguerit Maida, but she didn't answer the distress call. He sent a distress signal to the Alterra employees as well, but as soon as Alterra found him, he hid himself, claiming that Alterra's motivations didn't align with his. When Robin Ayou enters his Data Hub, she offers to download Al-an into her PDA. Al-an misunderstands and thinks Robin's equipment is part of her body, and accepts her help. As a result, Al-An gets downloaded into Robin's head/cerebral cortex.

Following the transfer, Robin will have to find and scan parts of Al-An's Storage Medium throughout the story, including an Architect skeleton, Architect tissues and Architect organs, which can be found at the various Architect Caches laying around Sector Zero. Even between the transfer to Robin's head and getting transferred into a new body, Al-an speaks with Robin a lot. Once Robin has all the blueprints and materials, she can construct a body for Al-An at the Fabricator Base.[1] It is revealed there, that he disobeyed the directive from his network when collecting the Sea Dragon eggs. That resulted in the mother of the eggs destroying the laboratory in which its eggs and Kharaa was experimented on, thus setting the Kharaa loose. He says that it was his mistake that Kharaa was released onto 4546B. He says that he must return to the Architect world, to repair the damage he's done. Robin accompanies him to the Architect world.

Al-An understands that being in Robin's head is uncomfortable for her, so he helps her build his new body. Al-An worries about what happened to his species, and feels guilty, as he could be indirectly responsible for what happened to them. He was shown to be a good leader, given that his network trusted him with leading the mission to 4546B. He seems to value efficiency and research above many things.

He seems to be curious about human behavior, although doesn't understand many aspects of it, such as dreaming, listening to music and sarcasm. Over the course of the plot, he learns to recognize some of the latter. He also has a sense of humor. When Robin asked him about hiding a phase gate, he jokes "only for the last millennium". (Although this might be just his lack of awareness as an Architect.)

Al-An was downloaded into Robin's head, making him depend on her entirely for that time. Al-An understands that this situation is undesirable to Robin, and helps her create him a new body by locating Architect facilities and body parts to scan. Robin is committed to helping Al-An, even after learning that the Kharaa escaping to the rest of planet was his fault. She shows empathy towards Al-An when he reveals this, and trusts him enough to leave with him. Al-An calls humanity inefficient many times, but this is most likely because of his lack of awareness as an Architect. Robin often responds to this by being sarcastic. The two of them sometimes talk about biology and science related things, they're both researchers. While he's in her head Al-An helps Robin accept her sister's death and find closure.

Marguerit doesn't respond to Al-An's distress call. While in Robin's head, Al-An is afraid of her when she is in her Prawn Suit. He says that he hopes that Robin will stay away from Marguerit in the future. 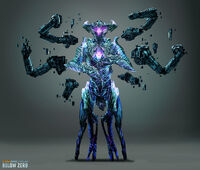 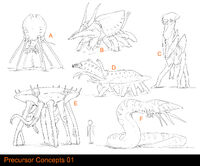 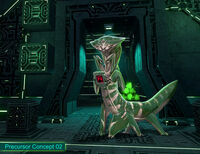 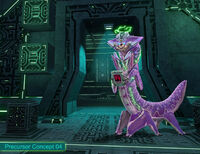