The Alien Bases are ancient structures found in many different biomes across the crater. They were built by the Precursors about one millennium previous to the crash of the Aurora spaceship.

Four Alien Bases exist in total, on the Mountain Island the Quarantine Enforcement Platform, in the Lava Castle the Alien Thermal Plant, in the Lost River the Disease Research Facility, and in the Lava Lakes the Primary Containment Facility. Alien Data Terminals can be found within each, explaining the functions and purposes of the Bases. While there are optional Alien Caches scattered throughout the world, these Bases are extremely vital to the story and must be visited.

The Quarantine Enforcement Platform is present on the Mountain Island embedded into the rock face. The purpose of this base was to destroy "all vessels without proper clearance", preventing other races from coming to the planet, getting infected and spreading the bacterium when they leave.

The Disease Research Facility is located in the Lost River. Its purpose was to conduct research on live specimens infected with the Kharaa Bacterium. It was damaged by a Sea Dragon Leviathan, and thus is suspended at a crooked angle, flooded, and surrounded by skeletal remains.

The Alien Thermal Plant is found inside the Lava Castle, in the Inactive Lava Zone, where it produces the power for all of the Precursor technology located throughout the crater.

The Primary Containment Facility can be found in the Lava Lakes, and holds the Sea Emperor Leviathan and its eggs, as well as many ancient relics presumably belonging to the Precursors.

Primary Containment Facility
Add a photo to this gallery 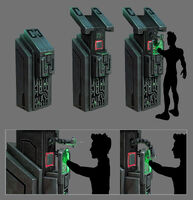 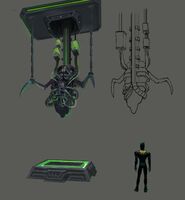 Entranceway concept art
Add a photo to this gallery 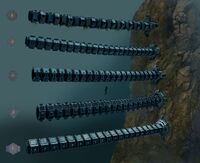 Precursor cable concepts
Add a photo to this gallery

Retrieved from "https://subnautica.fandom.com/wiki/Alien_Bases?oldid=341193"
Community content is available under CC-BY-SA unless otherwise noted.