Alien Robots are small robots created by the Precursor Race. They are found roaming within the Alien Thermal Plant and the Primary Containment Facility.

Their main function is to repair and uphold Alien Bases and thus are equipped with two welding tools, which can deal small amounts of damage. They are also programmed to defend Alien Bases from intruding life forms and will use the aforementioned tools as weapons if the need arises. The robots are far less elaborate than other Precursor technology, with a focus on simplicity and functionality. The Propulsion Cannon and Stasis Rifle are simple ways to remove the threat of the robots.

The Alien Robot is similar in size and shape to the Cave Crawler but coloured in the same way as most Precursor Technology, being predominantly dark grey with green luminescence.

The Alien Robot has an octagonal body with a small head on the front and a larger, rectangular object on the back.  It has four legs split into three segments each. Two green-tipped stalks used as repair tools protrude from its back. Decorative patterns are carved into most parts of the Alien Robot.

Upon sighting the Player, the robots become aggressive, attacking by thrusting their two welding tools towards the player, which deal 3 damage per hit. They spark when they take damage and explode when destroyed. Similar to the Cave Crawler, the Alien Robots are able to climb vertical surfaces and hang upside-down.

Alien Robots are also capable of climbing the Prawn Suit; however, this will not damage the vehicle.

An Alien Robot in the Alien Thermal Plant

An Alien Robot on the Prawn Suit

An Alien Robot in the Crag Field Arch Cache 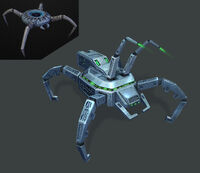 Alien Robot model from Sketchfab
Add a photo to this gallery

Retrieved from "https://subnautica.fandom.com/wiki/Alien_Robot?oldid=351012"
Community content is available under CC-BY-SA unless otherwise noted.