The Arctic Kelp Caves are a group of cave systems located under Arctic Kelp Forests. Many large Kelp Roots can be found in these caves. They are also home to Sea Monkey Nests, which are a source of Fragments.

There are two caves under the two largest Arctic Kelp Forests. There are six entrances in the western Arctic Kelp and nine in the eastern one.

The Arctic Kelp Cave has a dark green hue with many large Kelp Roots containing Kelp Root Pustules. The caves are lit up by the bulb and Radiant Sieve Corals. Oxygen Plants can be found throughout the cave. Calaverite Outcrops are also very common in the biome.

Two Ion Cubes can also be found in the biome.

Large roots and pustules inside the Arctic Kelp Caves

One of the many entrances to the area

A Hydrothermal Vent in the biome

A Monument, found deep in the caves

Entrance to the biome 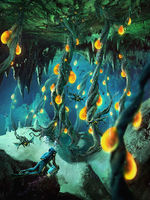