The Brinewing is a small, predatory fauna species.

The Brinewing possesses a long snout. The top jaw has a blue tip with a pair of small blue spines protruding upwards from it. The two fins are composed of a thin yellow appendage with a translucent blue membrane attached. In their resting state the fins appear small and triangular, but can extend into an almost full semicircle shape.

The main body is small, ending with a tail fin that appears to have been heavily reduced into a small spike. The front portion of the body is yellow and the back portion blue with yellow rings. The brine bladder is white in color and has a pair of short spikes on each side of the body. The brine bladder expands to accommodate the brine the creature uses to attack its prey, becoming distended and translucent. The Brinewing has two dark green eyes that become lighter towards the black pupil, and a small hole above each of these eyes that may be nostrils.

The Brinewing has a highly unique attack. A super cooled saline solution is expelled through the mouth by the contraction of a highly elastic bladder. As this solution is far colder than the water around it, the water in immediate contact with it is frozen. While hunting, the Brinewing has an enlarged belly, indicating it is prepared to release the solution. The Brinewing shoots ten icicles of the solution at its prey, which on contact will encase the target in ice, temporarily immobilizing it. After this, the Brinewing's belly will be a decreased size and it will grab and eat the frozen prey, then it will recharge its saline solution over a short period of time. The Brinewing's enlarged pectoral fins are used to keep the saline at supercritical temperatures; by fully extending them it ensures that heat loss from the body is maximised, keeping the saline in the bladder cold.

The Brinewing will attack and, if Robin or creature is hit, freeze them. This does no damage and the Brinewing has no harmful attack, but it leaves the player helpless and slowly sinking for several seconds, vulnerable to oxygen depletion and attacks by any nearby Symbiotes.

The player can be thawed by clicking LMB continuously.

The Brinewing bears many features reminiscent of members of the real life group of fish Sygnathiformes; The large transparent fins resemble the oversized fins of the flying gurnard, whilst the long snout and general head shape resembles the elongated snouts of Sygnathiforme fish within the subfamily Hippocampinae i.e. seahorses. It also very closely resembles the head of the male ribbon eel. The concept of the Brinewing's projectile attack hunting method may take inspiration from the real life archerfish, which are known for acquiring their prey by knocking them off branches by firing a jet of water from their mouth.

A Brinewing swimming near the Arctic Kelp Forest 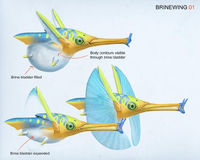 Another concept art - by Alex Ries 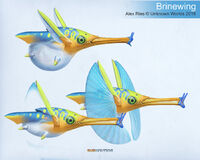 Higher resolution look at that concept art - by Alex Ries 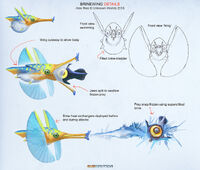 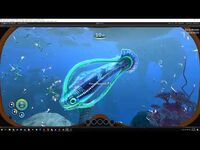