Subnautica Wiki
Register
Don't have an account?
Sign In
Advertisement
in: Crafted with Crashfish, Bioreactor Fuel, Defensive,
and 8 more
English

View source
watch 02:46
The Quarry - The Loop
Do you like this video?
Play Sound
This article is about Crashfish in Subnautica. Click here for information on this subject in Below Zero.

The Crashfish is a defensive fauna species found only in caves, usually in the Safe Shallows Caves, however, a group of 8 can also be found in the Kelp Forest Caves. The Crashfish lives in a symbiotic relationship with a flora species named the Sulfur Plant.

The Crashfish is an oval-shaped fish with widely spaced nostrils, a wide, seemingly toothless mouth, and one pale yellow eye with a large black pupil. The top of the body is red and scaly and looks like dripped on, its underside and face are covered by smooth, cream-colored skin. Many spikes protrude outwards from the Crashfish's body; these spikes are beige in color, tipped with red, and are responsible for triggering their characteristic explosive chemical reaction. The same spikes make up its fins, though these are much more brightly colored than the spikes found elsewhere on the body.

If the Crashfish explodes next to a Seamoth with the player inside, it can immediately destroy the Seamoth depending on proximity. Should an unaware player not see the Crashfish after hearing its warning noise, it is highly advised to swim in the other direction from where the sound originated. Crashfish also deals about 5% damage to a Prawn Suit.

The Crashfish is a very fast swimmer, it can even outswim a Seamoth, and can also easily catch up with an ill-equipped player, dealing severe damage to their health and also to their Oxygen level. There is an easy way of avoiding the Crashfish; the player can rush towards the Crashfish. Due to the crashfish’s speed, it lacks mobility and is unable to turn quickly so once the Crashfish explodes, the Player is out of range. The Crashfish becomes aggressive when the player gets too close and can be identified with its loud ‘reeet’ sound.  Using evasive maneuvers to put obstacles between the player and the Crashfish rather than swimming away in a straight line is advisable in most circumstances.

While the Crashfish is also scannable inside the Sulfur Plant, caution is advised when attempting this process. The easiest and fastest way to accomplish this is to freeze the Crashfish with a Stasis Rifle as it peeks out of its home to scan it.

Crashfish eggs can be found near Sulfur Plants. Take care when collecting them, as a nearby Crashfish explosion will destroy them.

A Crashfish peeking through the opening of its plant.

The Crashfish preparing to strike

A Crashfish outside of its Sulfur Plant

A Crashfish being held by a Propulsion Cannon 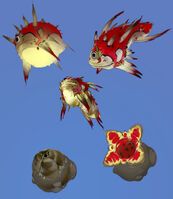 Model of Egg from Sketchfab

Highpoly model of Egg from Sketchfab