Attracts creatures to its location. Can be deployed by hand or by a submarine. Cannot be reclaimed once deployed.

The Creature Decoy is a deployable tool, crafted using the Fabricator. It acts as a distraction device to attract hostile creatures to it when deployed, giving the player the opportunity to escape whilst the creatures are distracted. It can be deployed by hand or from the Cyclops.

The Data Box containing the blueprint for the Creature Decoy can be found in Lifepod 4 and the Underwater Islands Wreck.

A Cyclops Decoy Tube Upgrade will increase the capacity of the Decoy Loading Tube, allowing up to five decoys to be loaded at once. 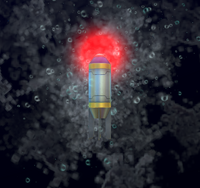