600 seconds (only when killed by a creature)

The Cryptosuchus is an aggressive, aquatic Fauna species.

Cryptosuchus typically patrol a specific area or path, mostly content to swim in circles and roar if not disturbed. They are aggressive, but the player must pass fairly close to them to trigger a response.

They are also surprisingly cowardly creatures if the player does not back down: even a single hit from the Survival Knife will cause a Cryptosuchus to yield its attack and swim a significant distance away, which in order to be aggravated again must be swum close to. They are also surprisingly weak, the best way to kill them is to ram them with the Seatruck. They will die in a single ram dealing minimal damage to the Seatruck.

The Cryptosuchus is a mid-sized predator bearing resemblance to crocodilians. the Cryptosuchus' body is covered in purple plate-like scales. These scales are sharp and slightly metalic, with two rows of spines along the back, which merge into one further down near the tail.

It has four well developed legs with large, webbed feet. the front feet have four claws, while the back feet have three. The toes are connected by a bright blue membrane.

A Cryptosuchus in the Thermal Spires

A group of Cryptosuchus in the Thermal Spires

A Cryptosuchus in the Purple Vents

A Cryptosuchus swimming near the Mercury II, visible in the background

A close-up of the Cryptosuchus's teeth 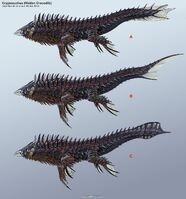 Concept art for four unused predators, with the exception of the Cryptosuchus.