Proceed with caution. A leviathan class creature is near.

The Crystal Caves is a biome within Subnautica: Below Zero. The biome serves as the only entrance to the Fabricator Caverns as well as the location of the Crystal Caves Cache. It can be accessed from the Deep Purple Vents or Tree Spires (Northern tunnel from Marguerit Maida's Base).

Caution should be taken while exploring this biome, as two Shadow Leviathans reside within the Crystal Caves.

The Crystal Caves is a large, rocky cave system dominated by large purple crystals mainly protruding from the cave ceiling and floor. Two Shadow Leviathans patrol the caves, increasing the threat level of the area. The floor of the biome possesses a network of trenches and a few deep fissures containing valuable Large Resource Deposits such as Kyanite and Gold.

The Crystal Caves is divided into three regions:

The Main Crystal Caves is the primary and most expansive region of the biome. The overall terrain is composed of layered and folded rocks forming cliffs and ridges, as well as a few trenches. Large patches of yellow seagrass hosting a number of Jade Membranes can be found throughout this region. Additionally, Uraninite Crystals can be found within these patches of seagrass. The region consists of clusters of large crystals littering a majority of the biome. The biome is rich in Raw Materials as well as various Large Resource Deposits. The entrance to the biome is home to large amounts of Hydrothermal Vents, as well as Ribbon Plants. Towards the end of the biome, the player can find two entrances to the Fabricator Caverns.

The entrance from Marguerit Maida's Base is slightly different from the rest of the biome, sharing similar Flora and geological structures to the Tree Spires biome as well as holding many large plateaus to hold said flora and structures. The Deep Purple Vents entrance is considerably different, hosting many Bioluminescent coral-like rocks and many jagged spikes breaching the ground around the cave.

The two entrances to the Crystal Castle are located in this section.

Overview of the Crystal Caves.

A Shadow Leviathan patrolling the biome.

Southern Entrance to the Crystal Castle.

Eastern Entrance to the Crystal Castle.

Hydrothermal Vents in the biome.

A patch of Jade Membranes found within the biome.

A couple of Ribbon Plants found in a patch of seagrass within the biome.

The Crystal Castle is a smaller cave system located in the biome. The region sports significantly heavier crystalline growths than the rest of the biome, forming compact antechambers and corridors. Another distinct feature about this area is that a majority of the crystals can be seen forming taller columns than the ones in the Main Crystal Caves, whereas the crystals of the Main Crystal Caves emerge from a base, these ones appear to emerge sideways from the walls. This area also contains valuable Raw Materials and a couple of Fauna species. It extends several meters down from both entrances, possessing two antechambers in either entrance that lead to the deepest section of the biome and into the Crystal Caves Cache.

The inside of the Southern Entrance.

The southern connection to the deepest chamber of the Crystal Castle.

The inside of the Eastern Entrance.

The Eastern connection to the main chamber of the Crystal Castle.

The deepest chamber of the Crystal Castle.

An abundance of Large Resource Deposits, notably Kyanite, and other valuable resources such as Magnetite and Nickel Ore are found within these trenches.

Overview of one of the fissures.

An entrance to a deeper portion of the region.

An entrance to one of the fissures. 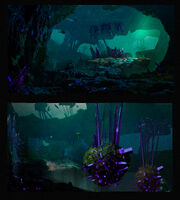