The Deep Shroom is a hazardous flora species found in abundance in the Blood Kelp Zones and their caves, in small clusters, and in the Lost River and the Sea Treader's Tunnel Caves. It is a relative of the Acid Mushroom, and is used as a raw material in the manufacturing of Hydrochloric Acid.

The player can pick up Deep Shrooms by hand, which is the safest mode of harvesting them, or strike them with a knife to destroy them. This causes 8 damage to the player and surrounding flora and fauna due to acid being released into the water and gives the player four Deep Shroom Spores.

The Deep Shroom and its spores can be planted in an Exterior Growbed or an Alien Containment, and will not deal damage when harvested with a knife.

The Deep Shroom appears as a stout mushroom with a white cap, becoming pink towards the center, and a dark grey stem. It is similar in shape to its relative, the Acid Mushroom, as they share the same model but have different colorations.

Like the Acid Mushroom, the Deep Shroom possesses highly acidic compounds in its flesh that leach into the water if its skin is pierced. As such, harvesting spores from the Deep Shroom with a knife triggers its acidic flesh defense, dealing 8 damage to the player and surrounding flora, fauna, and structures, as mentioned earlier.

It is possible for a Deep Shroom being destroyed to cause a chain reaction, damaging other surrounding Deep Shrooms enough so that they burst as well. This chain reaction can instantly kill a player, wreck a Seabase or heavily damage vehicles, so it is advised that the player separates Deep Shrooms before harvesting their spores.

Deep Shrooms will shrink upon fluctuations in the local water pressure such as if the player approaches them, and will return to their original size if the player holds still or leaves the area.

A cluster of Deep Shrooms in the Blood Kelp Zone 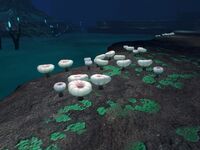 Size comparison with the player
Add a photo to this gallery

Retrieved from "https://subnautica.fandom.com/wiki/Deep_Shroom?oldid=299189"
Community content is available under CC-BY-SA unless otherwise noted.