The Degasi Seabases are habitats constructed by the three Degasi survivors, who crashed while aboard the Degasi about a decade before the Aurora. There are five of these bases, three of which can be found on the same island (one main base and two smaller, satellite base structures), all of which can be discovered during exploration. These bases are in very poor condition and have succumbed to the nature around them.

The player can find several abandoned PDAs scattered around the bases, which reveal the fate of the Degasi survivors. Some of these PDAs will contain a signal leading to another base.

It is advisable that the player brings appropriate tools and equipment on hand while exploring these abandoned bases, as hostile creatures are often found to inhabit the site. The Degasi Seabases also house many placeable items.

The first seabase built by the Degasi crew, consisting of one main base in the center of the Floating Island with two small observatories on each of the peaks.

The Degasi crew built the central main base first, later adding the observatories to allow Bart Torgal to study the environment. Under Bart's guidance, they constructed a small farm on the east of the island, consisting of several exterior growbeds with various species of flora.

Extreme weather conditions and a lack of resources caused tension among the crew, forcing them to leave the habitat and set up a new one in the Jellyshroom Cave.

Inside the Multipurpose Room there is an abandoned PDA on the desk and a Alien Tablet beside it. The room also contains wall planters. The path to its hallway is blocked by a boulder, so it can only be accessed via climbing on top of the room.

Outside, there are several exterior growbeds with Marblemelons and Chinese Potato Plants planted inside. South east of the main base, another abandoned PDA can be found lying on the ground in-front of a small archway.

Inside on the left, there is a Vac-pack with an abandoned PDA beside it. In the Observatory, there is an Interior Growbed.

Inside there are two Composite Plant Pots, in the observatory, there is a chair and a desk with an abandoned PDA on it.

The main Abandoned Seabase on the Floating Island

The Abandoned Farm on the island

The second Seabase built by the Degasi crew, located within the Jellyshroom Cave. Away from the main base, four smaller outposts are present which feature a small amount of resources and Fragments.

Despite the disagreements between the crew, it was the right decision from Marguerit Maida to build a habitat in the Jellyshroom Cave, with a maintained Food & Water supply as well as large amounts of Lithium. During their time here Marguerit Maida found an unknown artifact whilst exploring.

They came to realize that whatever shot down the Degasi would also do the same to a rescue ship. Marguerit Maida was determined to investigate further but Paul Torgal argued.

The seabase was experiencing heavy stress under the water pressure and was in some disrepair by the time they left it, moving on to construct the Deep Grand Reef base. It is now flooded and infested by Drooping Stingers and starfish.

At some point, the Degasi Crew constructed a total of 4 outposts in close proximity to the Main Habitat. Their purpose is currently unknown. One of the outposts contains a Data Download which guides the player towards the Main Habitat via a signal.

Into the hallway, there is a ladder leading to the upper level, which has an observatory containing an abandoned PDA.

Further down the hallway and into the second room, a bed, several wall planters, a desk and a chair can be found. Yet another two abandoned PDAs can be found here, one on the desk.

Outside of the entrance, an abandoned PDA can be found on the ground near the giant Jellyshroom plant.

A Wall Planter inside the Jellyshroom base

Drooping Stingers in the Jellyshroom base

One of the outposts

Another outpost, featuring a small base setup

Another outpost
Add a photo to this gallery

The third and final seabase built by the Degasi crew, found in the Deep Grand Reef.

Paul Torgal was not pleased with the decision to build a habitat in the Deep Grand Reef as it was risky and he doubted Marguerit Maida's cooperation with the rest of the crew. Whilst living here they realized that they were infected with some kind of bacteria. Tension among the crew was high at this point, Paul, saying to Marguerit: "When we get off this planet I am going to drag you through every court in the damn federation!". The seabase was attacked by a Reaper Leviathan. The last recorded message of Paul Torgal describes the incident and his final moments.

There are two entrances to the Seabase - one way is via a broken Basic Compartment, the other through an open Hatch on the side of the upper Multipurpose Room.

The lower section has many Windows, one Desk and two Beds. Next to the Beds are Lockers, and above one Bed is a Picture Frame and on it a Data Box containing Swim Charge Fins. On the desk, a bunch of scattered bottles of spirits and an Abandoned PDA can be found.

Inside this lab are multiple Desks and Counters with lots of Lab Equipment. On one of these Desks lies the Orange Tablet and a Microscope. A Cuddlefish Egg can be found on the floor of the lab.

A screenshot of the Deep Grand Reef Degasi base from Twitter. 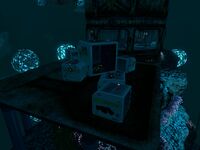 Cargo found outside of the base 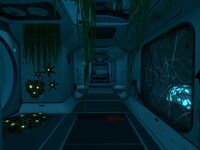 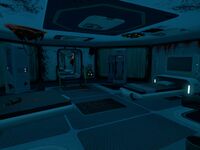 The ground floor of the base. 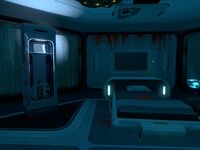 Another view of the living quarters 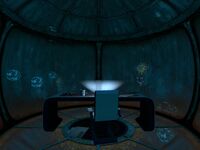 An Observatory inside the base.

The Data Box containing the Cyclops Shield Generator Blueprints.
Add a photo to this gallery

Retrieved from "https://subnautica.fandom.com/wiki/Degasi_Seabases?oldid=329965"
Community content is available under CC-BY-SA unless otherwise noted.