View source
watch 02:58
No Man's Sky Update - The Loop
Do you like this video?
Play Sound
This article is about Delta Station. You may be looking for Delta Island.

Delta Station is a derelict Alterra Corporation base built to sustain those working at the island's docks and Koppa Mining Site. It is located at the pinnacle of Delta Island.

Delta Station is a rather small facility comprised of a pair of dilapidated Multipurpose Rooms, with their interiors partially buried by snow. Its front door is a bulkhead that opens into a break room with a Nutrient Block, a First Aid Kit and a Large Filtered Water, as well as a non-functional Fabricator on the wall. Two scannable posters can be found here: one concerns Alterra's bounty for Architect Artifacts, while the other is a map of Sector Zero with Alterra facilities and other points of interest highlighted.

The second Multipurpose Room serves as the personal quarters of Fred Lachance and Jeremiah Murgle. Each individual's side features a bed, a desk, and a chair. Fred's side has a Seatruck poster, while Jeremiah's features anti-Skyray propaganda and a Modification Station.

Located to the right of the main base is a smaller base, serving as the office of Emmanuel Desjardins. Emmanuel's base consists of a single Multipurpose Room and an Observatory module.

There is a Data Box nearby with the Scanner Room Blueprint, outside of the station. On top of a crate beside the door is the first Habitat Builder fragment the player is likely to encounter.

Fred's side of the room

Jeremiah's side of the room 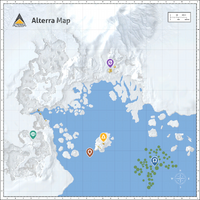 The exterior of Emmanuel's office