Depth is one of the main HUD indicators in Subnautica. The depth element of the HUD is always present and shows the player's current depth below the surface. Keeping an eye on this HUD element is important when navigating the Seamoth, Cyclops, Prawn Suit, and Seatruck.

Depth is only measured underwater; if the player's position is above sea level, the indicator will always show a depth of 0 no matter how high up they are. Depth effects are disregarded in any area which has an atmosphere, and in water which is inside any kind of enclosed facility.

The maximum possible depth the player can reach is 8,192 meters in Subnautica by going down the dropoff at the Crater Edge: passing this will immediately warp the player and any vehicle they are in to Lifepod 5.

There is no strict depth limit for the player character outside of a vehicle; they are never damaged by depth alone no matter how deep they go. However, by default their oxygen depletes faster as they go deeper. From 0–99m they will lose 1 oxygen every second. At 100–199m this increases to 2 oxygen every second, and below 200m oxygen loss maxes out at 3 every second. The Rebreather item completely removes this effect while equipped and gives a uniform 1 oxygen loss per second regardless of depth.

Depth also has an impact on Seabases. While a base has no crush depth per se, and modules will never leak due to depth alone, any module that reduces Hull Integrity has a multiplier added to its Integrity penalty that increases the further down the base is built. The multiplier is fixed at 1.0 down to 100m, with an additional 0.001 added for every meter beyond that. For example, at 750m the multiplier will be 1.65: adding a Moonpool to a base at this depth (basic penalty 5.0) will result in a structural integrity penalty of 8.25.

Bases built at 0 depth are totally unaffected by the Hull Integrity system.

There are two stages of depth for vehicles.  When the vehicle is in the safe zone, the Cyclops and Prawn Suit will not take impact damage, and the Seamoth's impact damage will be minimal.

When a vehicle goes past the crush depth, the computer system will warn the player that hull damage is imminent. The player then has a few seconds to turn back to avoid damage. After this a creaking sound like buckling metal will be heard at regular intervals. In the Seamoth and Prawn Suit, the vehicle will take constant damage until it is destroyed or returns to its safe depth. In the Cyclops, external hull breaches will start to appear, with the Cyclops' health decreasing as they do. The Repair Tool can generally fix a vehicle faster than the damage-over-time from being below crush depth damages it (though in the case of the Cyclops this is trickier due to the need to find the breaches), though this is only a temporary solution.

A vehicle docked within a Cyclops cannot take damage while still inside the Cyclops no matter how deep the latter goes.

It is possible to increase a vehicle's maximum depth using Upgrades.

The HUD Indicator at 94m

The HUD Indicator at 158m 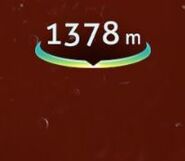