Shallow Twisty Bridges
The Drop Pod is a deployable vessel present in Subnautica: Below Zero. It is deployed by Robin Ayou's shuttle, and functions similarly to Lifepod 5 from the original Subnautica. The drop pod will land in a random location within a small area.

During the game's introduction, Robin pilots a passenger shuttle with the Drop Pod attached while heading to 4546B. A meteor collides with her shuttle, causing it to the eject the Drop Pod. The Drop Pod deploys shortly afterward, landing with the help of a parachute. The pod functions as a safe haven for the player until they are capable of constructing their own Seabase.

The Drop Pod is accessed using a door. A Fabricator is located to the left of the entrance, with a storage locker to the right. A single window is included on the side opposite the door.

The Drop Pod in the Shallow Twisty Bridges
DropPodInside1.jpg
The Drop Pod from the inside

Multiple unused versions of the Drop Pod - by Evgeny Park 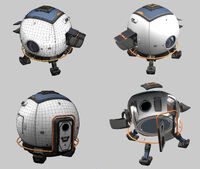