Subnautica Wiki
Register
Don't have an account?
Sign In
Advertisement
in: Crafted with Eyeye, Bioreactor Fuel, Passive,
and 15 more
English

View source
watch 02:46
The Quarry - The Loop
Do you like this video?
Play Sound
This article is about Eyeye. You may be looking for the Red Eyeye.

High in fluids. Low calorie count. Hard to keep down.

The Eyeye is a small, passive, herbivorous fauna species. It can be caught and is edible. It possesses moderate food properties, and does not reduce hydration when consumed, making it a decent food source when a player is unable to cook any food.

Eyeyes are very common and appear in many biomes, also spawning in large numbers in the Jellyshroom Cave.

It is worth noting that no water will be lost when eating an eyeye raw.

The Eyeye is minuscule in comparison with other common types of fish, with a pale green body and no discernible mouth.

The Eyeye possesses a comparably huge, singular eye, taking up most of its front section. It has four translucent blue bioluminescent fins, which are set in a cross pattern behind its eye.

The Eyeye swims around slowly and aimlessly and often pauses in place to scan the area using its huge eyeball. It will flee from the player upon noticing them.

Oddly, other creatures can be seen 'bullying' Eyeyes by repeatedly swimming into them at high speeds, causing them to spin out of control. The reason for this is unknown.

An Eyeye held in the players hand

An Eyeye in the Dunes

An Eyeye in the Jellyshroom Cave

An Eyeye in the Sea Treader's Path at night

An Eyeye next to a Reefback Leviathan 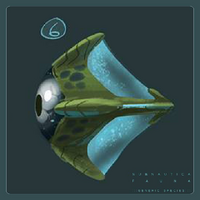