Fauna is the term for animals, in this case, the animals of Planet 4546B . Fauna in Subnautica can be found all over the planet, from the deep and dark depths of the secretive Lost River to the vibrant Safe Shallows, and even to the fiery pits of the Lava Lakes.

Fauna on Planet 4546B comes in all shapes and sizes, ranging from the tiny, cave-dwelling Rockgrub, to the colossal Sea Dragon Leviathan that spews molten minerals from its mouth. Fauna on Planet 4546B is capable of enduring and adapting to various environments , although unable to thrive due to the presence of the Kharaa Bacterium. Certain species of small fauna can sometimes be seen forming mostly noninteractive shoals. Fauna on 4546B also has yellow blood. The fact that the appearance of some species of the planet being similar to that of planet Earth species can be explained as a simple case of convergent evolution.

The player can scan Fauna with the Scanner, allowing them to view information about the creatures in their PDA.

Most known fauna species on Planet 4546B are simultaneous hermaphrodites, meaning that they have a single-sex capable of playing the role of either the male or female in reproduction and every individual being able to lay eggs and fertilize them. Two parents are still required to fertilize the eggs once laid, making it sexual reproduction. At least one fauna species is exempt from this and reproduces entirely asexually although the norm for the planet is sexual reproduction, as can be observed in all species that can be placed in an Alien Containment unit who will require two individuals of their species to produce eggs. The only species that does not reproduce is the Warper due to the fact they are artificial fauna.

All known complex species on 4546B reproduce via egg-laying. 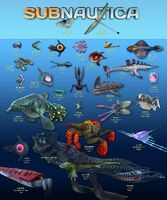 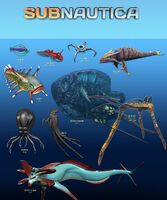 Various fauna renders
Add a photo to this gallery

Retrieved from "https://subnautica.fandom.com/wiki/Fauna?oldid=319906"
Community content is available under CC-BY-SA unless otherwise noted.