The plant life found on Planet 4546B varies greatly in size and appearance, from the bright Acid Mushrooms to the mysterious Giant Cove Tree. Flora can be found all over the planet, except for the Lava Lakes, due to its extreme temperatures, and the Crater Edge. The only exception to this is the dead plants found at the bottom of the dead zone. They are immobile life forms, staying anchored in one place unless manipulated via the Repulsion Cannon, Propulsion Cannon, knife or some other methods.

Although most Flora are passive, there are certain exceptions which act as hazards to the player, dealing damage to them on contact or within a certain radius. For example, the Acid Mushroom will release a cloud of acid when struck, damaging the player. Most Flora can be harvested, picked, or farmed whilst some Flora also serve as a Food & Water source.

Some Fauna, such as the Floater or Amoeboid may act like flora, and due to common misconceptions, are mistaken for flora, but are just parasites. 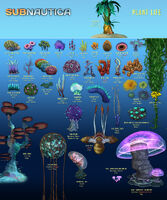 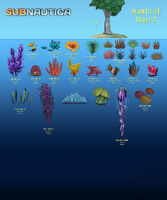 Subnautica Flora sheet 2
Add a photo to this gallery

SN PlantsWaving
Various Flora animations
Add a photo to this gallery
Retrieved from "https://subnautica.fandom.com/wiki/Flora?oldid=342041"
Community content is available under CC-BY-SA unless otherwise noted.