Forcefield Controls are found around or within every Alien Base and some Alien Caches. They act as locks and are each connected to a forcefield, preventing progression through the base unless the corresponding Alien Tablet is used. The majority of Forcefield Controls require a Purple Tablet to be deactivated, though there are three exceptions to this; the Control outside of the Lost River Laboratory, which requires the Orange Tablet, and the two Controls in the Primary Containment Facility, both of which require the Blue Tablet to be deactivated.

The orange Forcefield Control outside of the Lost River Laboratory

The Control in the Disease Research Facility guarding a Data Terminal

The player inserting a Purple Tablet into a Forcefield Control 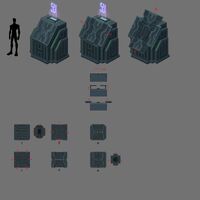 Concept art
Add a photo to this gallery
Retrieved from "https://subnautica.fandom.com/wiki/Forcefield_Control?oldid=334933"
Community content is available under CC-BY-SA unless otherwise noted.