The Gargantuan Fossil is an enormous and ancient fossil, approximately three million years old, found in the Bone Fields. The skeleton belonged to an eel-like, Leviathan Class super-predator dwarfing both the Sea Dragon Leviathan and Sea Emperor Leviathan, despite only being around one third of the whole skeleton. The remains consist of a huge, vaguely reptilian skull and sixteen pairs of huge ribs. The skeleton is covered in flora and coral. The skull is so large that a Cyclops can fit inside its jaws.

Smaller versions of its ribs can be seen in the entrance to the Lost River Junction, while a much smaller but otherwise identical skull which also gives the Gargantuan Fossil scan can be found in the Ghost Forest, presumably from a juvenile example of the species.

The Precursors were also studying these remains, as evidenced by small, angular indentations on the ribcage. These samples were probably studied at the Lost River Laboratory Cache, as this was the main site in which Leviathan class bone samples are found.

How it came to rest in the Lost River is difficult to explain, as it seems unlikely that such a limited biome would be a colossal creature's natural habitat: the only real clue given is that the PDA log states that geological changes have occurred, and that the creature could not have entered the Bone Fields in their current configuration. Given the intact nature of the bones, one possibility is that the Lost River represents a natural tunnel system the creature entered in the distant past, now choked with vegetation and partially collapsed such that it could not enter them in their modern arrangement.

The cause of death cannot be identified from the remains: there is, however, no evidence the creature died of something other than old age or some other natural cause. Whether the infant creature was related to the adult or their proximity is simply a coincidence is also not clear.

The skeleton is enormous. The skull by itself is just under 100 metres in length, almost as long as the entire body of a Sea Dragon Leviathan. The two lower front teeth measure at 11.4 metres in height and the two upper teeth at 10.3 metres. The largest of the structures resembling eyesockets measure 9.7 metres in diameter.

The skeleton that remains measures at 402 metres in length, and with the PDA estimating that it is only one third of the complete specimen, the creature would have measured between 1100 and 1300 metres long.

When this creature still roamed the planet, the sheer size of its body would have prevented it from living within the crater, as it is more than half the 2 kilometer diameter of the entire structure.

The size of the creature would have restricted it to live almost entirely in the Dead Zone as an adult. As little is known of life outside of the crater, it is not clear what it could have preyed on or if the prey species still exists: the most likely living species would be the Reefback Leviathan.

They were likely very long-lived with a low reproductive rate, as a large population of these creatures would very quickly outpace the ability of prey species to repopulate.

The reptilian skull may suggest distant relation to the Sea Dragon and, by extension the Sea Emperor, though these similarities may be purely superficial. It is also possible that rather than the rib cage having toppled over into an upside-down state, the rib cage is in fact the correct way up and this creature had a similar skeletal structure to the Sea Dragon, specifically sharing its inverted ribcage. 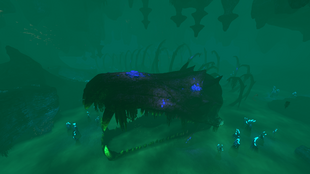 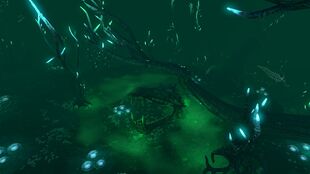 The miniature version of the gargantuan skull found within the Ghost Forest. 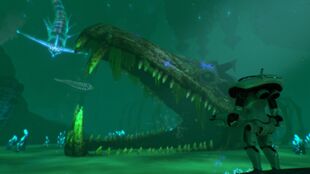 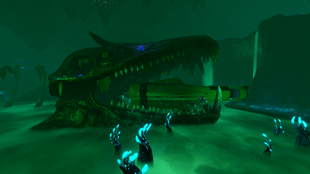 The Gargantuan Fossil - Player, Seamoth, Prawnsuit, and Cyclops for scale 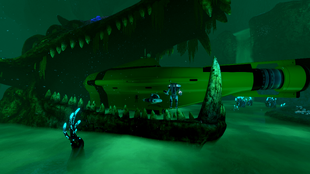 The Gargantuan Fossil - Player, Seamoth, Prawnsuit, and Cyclops for scale (closer up)
Add a photo to this gallery