View source
This article is about the Giveaway Items. You may be looking for Miscellaneous Items.

Giveaway Items are placeable items built using the Habitat Builder. They can only be placed inside of the Cyclops or Seabases.

At the moment, the access to these items is restricted. One either needs to have purchased the Subnautica Special Edition or have a special activation code that can be redeemed in an in-game menu. Redeeming a code successfully adds the item in question to the player's Steam inventory and unlocks it inside the game.

Most of them are dedicated to certain Youtubers. All Giveaway Items except the Special Edition Hull Plate and the models are tradable inside the Steam economy.

For common players, these other variants are not available; the redeem code is given to the rightful owner and only that person can build it in-game.

Another tribute to popular YouTuber JackSepticEye, a model of his channel mascot Septiceye Sam in a jar.
When clicked on, Jack's Septic Tank will jiggle around and say high-pitched voice lines from JackSepticEye.

This model is a doll of a character of Markiplier's, Wilford Warfstache. It is identical to the other unusual doll aside from a slightly different pose and a large, pink moustache.
When clicked on, the doll will say voice lines from Markiplier.

A second tribute to a popular YouTuber by the name of "EatMyDiction".
This is a model of his pet cat Marla. 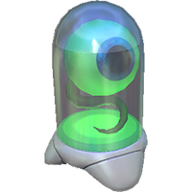 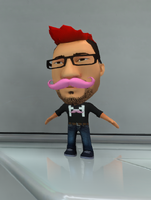 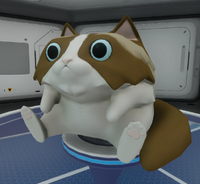