Glow Whales hatch from these.

The Glow Whale is a passive leviathan class fauna species of Subnautica: Below Zero.

The Glow Whale is huge and whale-like in form, with the body ending in a fluked tail. Its eyes have yellow irises and large black pupils. Each eye has a pill-shaped photophore directly in front of it. Atop the head a pair of translucent blue "horns" can be seen.

The body displays countershading, with the dorsal side being grayish blue and the ventral side light blue. Well defined ridges are visible on the dorsal side. These run along the sides of its body from the head to the lower back, which is covered in white spots.

On either side of the Glow Whale, two huge, sail-like flippers extend diagonally upwards. The flippers have a dark blue top side and a slightly reflective underside, brown in colour with small glowing orange spots. At the tip of each flipper a small pod is attached by a long tendril. On the underside of the pod is a teardrop-shaped photophore. On the ventral side of the body, directly below each of the flippers is a far smaller fin. Barnacles and vegetation seem to thrive on various parts of the creature's body.

Glow Whales move very slowly in large, open ocean with other Glow Whales. They can be seen doing deep dives with other whales, as well as periodically breaching the surface. They are often seen performing large gulps to consume Shoals of Fish.

The player can interact with Glow Whales by riding on its back or petting it near the eye. Petting the Glow Whale's eye will cause the area of contact to glow for a short period of time.

The Glow Whale appears to have convergently evolved with the baleen whales of Earth, sharing a very similar morphology and feeding behaviour. Though it lacks baleen plates entirely, it shares the longitudinal ridges possessed by rorquals along the ventral side of the body. Which allow for the body to expand when feeding. The spotted and ridged back of the Glow Whale is extremely similar in appearance to the backs of whale sharks, the largest fish on Earth.

A Glow Whale in the open ocean

A Glow Whale on the edge of the Tree Spires

A Glow Whale jumping out of the water

A Glow Whale descending into the East Arctic 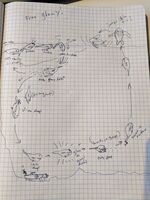 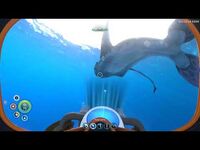