Subnautica Wiki
Register
Don't have an account?
Sign In
in: Story, Crafted with Eyes Plant Seed, Crafted with Fungal Sample,
and 5 more
English

An organic substance derived from plants found in the emperor's natural breeding grounds. Designed to trigger a hatching response.

hatchingenzymes
Hatching Enzymes are the item necessary for hatching the Sea Emperor Babies. Its blueprint is unlocked after the player has activated the Aquarium Arch.

After being crafted at a Fabricator, they must be inserted into the Incubator Device in order to hatch the Sea Emperor Babies.

The ingredients for the Hatching Enzymes are easily gathered by reactivating and using the four Alien Arches in the Primary Containment Facility. The arches lead to the Lost River Ghost Forest (Ghost Weed), the Crag Field (Eye Stalk), the Mushroom Forest (Fungal Sample) and the Bulb Zone (Bulb Bush). Sea Crown can be found in the trenches of the Sea Emperor Leviathan's aquarium. 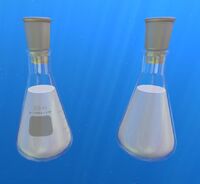 Developer screenshot of the Hatching Enzymes