Subnautica Wiki
Register
Don't have an account?
Sign In
Advertisement
in: Crafted with Hoverfish, Bioreactor Fuel, Passive,
and 10 more
English

The crispy, salty legs are the highlight. Dehydrating, but keeps well.

The Hoverfish is a small, passive, herbivorous fauna species. It resides mainly in the Kelp Forest, where it slowly swims around the Creepvines or hovers above patches of seagrass.

The Hoverfish has a teardrop-shaped body with six legs, three on each side. On its head are two black eyes, two small nostrils and a broad mouth, resembling the face of a frog. The legs each have a small, circular pad surrounded by a thin, transparent membrane along the edges.

The Hoverfish's body is mostly a light green in color, except for its back, which features blue-white speckles. Its legs are pale turquoise and its pads are yellow. The dorsal speckles, along with its padded appendages, are capable of emitting bright bioluminescent glows.

As its name implies, the Hoverfish "hovers" in the water currents between the Creepvines, and "swims" rather slowly. When approached by the player, the creature will not flee.

The Hoverfish will approach other fish and push them around. It will also do this to the bodies of deceased fish.

The Hoverfish appears to show the most emotion compared to other edible fauna, as it will blink, wiggle, smile and shake its head in fear when being held.

Hoverfish can be found around Reefback Leviathans, usually in groups of two or three.

Size comparison between a Hoverfish and the player

A Hoverfish held in the player's hand at night 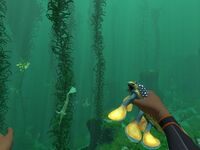 A Hoverfish held in the player's hand during the day

Closeup of the face

Hoverfish in its natural habitat

Concept art, as featured in the Twisty Bridges' Concept Art