Ion Cubes are a piece of technology created by the Precursors. They can contain massive amounts of energy equivalent to a 'small nuclear detonation' in a stable state. Ion Cubes are used to power certain Precursor devices, such as Alien Arches, which will only function once an Ion Cube has been inserted. They can be used to craft Alien Tablets, as well as powerful Ion Batteries and Ion Power Cells.

Ion Cubes can be found in Alien Bases and some Alien Caches. Large Ion Cube Deposits can be found in the Alien Thermal Plant and the Primary Containment Facility. Like all large resource deposits, the Prawn Suit Drill Arm can break the deposit down into individual materials.

An unending supply of Ion Cubes can be acquired from the Large Ion Cube Deposit in the antechamber of the Primary Containment Facility; after the deposit has been depleted, the platform raises up and a ceiling-mounted laser begins generating a new deposit. Each of these deposits yield three Ion Cubes. 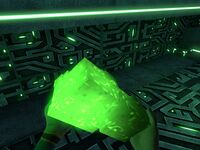 An Ion Cube held in the Player's hands

An Ion Cube on a pedestal in the Quarantine Enforcement Platform

Another Ion Cube on a pedestal in the Disease Research Facility

Yet another Ion Cube on a pedestal, in the Lost River Laboratory

An Ion Cube Deposit in the Alien Thermal Plant 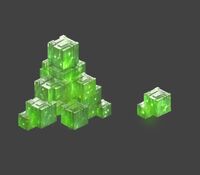