View source
watch 02:46
The Quarry - The Loop
Do you like this video?
Play Sound
This article is about the Kelp Forest Caves. You may be looking for Kelp Forest.

Be advised: a common complication for cave divers is loss of orientation, followed by eventual asphyxiation.

Many sections of the caves are dangerous and difficult to pass through due to their dark and hazardous nature, with lifeforms such as Drooping Stingers and Mesmers. These caves generally have an abundance of resources, albeit mostly concentrated in much deeper areas.

One of the caves connects to one of the Lava Geysers in the Safe Shallows. These caves are well known for the incredibly high amount of Crashfish at specific parts of the caves. It is very risky to go near this area as many Crashfish will start chasing the player at once and, if not careful, could kill the player.

The entrance to the cave system with the Eye Stalk plants can be found near Lifepod 3.

Overview of the Kelp Forest Caves

Drooping Stingers, a common hazard found in the caves

A Lava Geyser found next to one of the caves' entrance

A view from the bottom of one of the caves 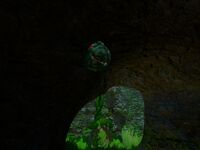 A Sulfur Plant, found in the Kelp Forest Caves

A Tree Leech in the Kelp Forest Caves

Some of the Fauna found within

The entrance to the largest of the caves

Another view of the largest cave

Brain Coral within a cave

A view from the bottom of a cave

A large cluster of Drooping Stingers