Leviathan is a classification given to extremely large creatures of the Subnautica universe. Any fauna species large enough to lack natural predators can be classified as Leviathan; they need not be predatory. Although the term "Leviathan" is used to refer to a large mythical aquatic creature in the real world, there is no confirmation on whether the Leviathan classification is restricted to fauna in the Subnautica universe, or is simply the term used for any species of a sufficient size.

Relation to Other Leviathans

Leviathan is not part of a taxonomic classification so does not imply any of the species classified as such are related, at least despite their evolutionary status. In fact, the only two that appear to have any close current relation are the Sea Emperor Leviathan and Sea Dragon Leviathan who share several features including an almost identical body shape, seven identically positioned tentacles dotted with glowing spots, two forelimbs and a pair of light-producing organs atop their snouts. These two most likely shared a common ancestor that has since diverged into a "smaller", cave-dwelling predatory species and a larger, planktivorous species residing in the open ocean.

Leviathans of the Past

Despite being enormous when compared to the fauna of Earth, the leviathans inhabiting Planet 4546B in the present day are dwarfed by their predecessor; the three-million-year-old Gargantuan Fossil at full length is estimated to be 6-8 times longer than an adult Sea Emperor Leviathan specimen. To support a predator of such titanic proportions, many of the other creatures of that time period must have also been of colossal proportions.

The one-million-year-old Ancient Skeleton is enormous, with the gaps left by its missing teeth being large enough for Ryley Robinson to swim through comfortably. The exact size of this creature cannot be determined as the body form of the creature is extremely bizarre and it is unknown if the skeleton visible is the entire skeleton. What is available is around 100 meters in length, but it is also extremely bulky, giving it more body mass than anything alive on the planet today.

In order to support creatures of these magnitudes (if any are still alive currently in 4546B), it is mandatory for these creatures to reside tens (if not hundreds) of kilometers away from the Crater Edge for their space along with food supply to be satisfied enough for sustenance and survival. As well as this, they would have to feed on fully grown leviathans that feed on smaller leviathans or microscopic creatures (such as Adult Ghost Leviathans or other organisms of the same caliber as the latter).

The Squidshark is stated as "a leviathan-class predator at the smaller end of the scale" by its databank entry, though it is not included within the Leviathan tab in the databank.

Sea Treader (player below torso, in between legs)

Ventgarden size comparison (Player is tiny dot above the bell) 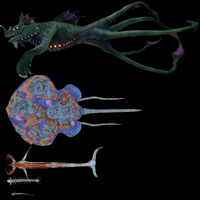 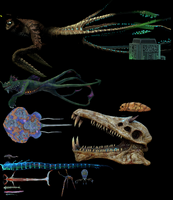