Lily paddlers hatch from these.

The Lily Paddler is a defensive, herbivorous fauna species.

The Lily Paddler has a rather flamboyant appearance, decorated with several brightly coloured fins. It is large in size and has a predominantly blue body accented with purple and beige. A long, beige crest runs down the middle of the head, protruding slightly above the surface of the head and dividing the head into two clear halves. The head is flattened and almost octagonal in shape. Two pairs of green stalks protrude from either side of the head and are tipped with spherical orange eyes with darker orange sclerae. On the underside of the head three black mandibles are situated around a small circular mouth.

A pair of long stalks are attached to the upper half of the head. Each having three pink leaf-shaped structures at the top and a smaller green leaf at the base, with three additional pairs appearing on the tail portion of the body. The main section of the body has a large hump, of which the top is beige and has two large black stalks dotted with bright white spots and splitting into four long, striated fins each bearing a bright orange spot with a dark circle in the middle, similar in color to their eyestalks.

The underside of the body features two long arms ending with small claws, seemingly capable of grasping objects and bringing them to the mouthparts, but ill-suited for defense. The body ends with a slender tail, terminating in a broad, pale-green tail fin.

The Lily Paddler is capable of a form of defensive hypnosis that it will use on the player if they approach, causing them to lose control of their movement and be reoriented against their will, similar to the Mesmer though nonaggressive.

This hypnosis leaves the player in a confused state for some amount of time, during which the function of the Compass and HUD elements are impaired, and audio is distorted[1].

The Lily Paddler's design draws on many aspects of the real-life fish the weedy seadragon, though unlike the weedy seadragon it appears far more focused on display over camouflage. The claws are very similar to those of many small decapod crustaceans.

A Lily Paddler in the Tree Spires

A Lily Paddler in the Lilypad Islands

A group of Lily Paddlers in the Lilypad Islands
Deep Pads Lilypaddler
A Lilypadder in the Deep Lilypads Cave. 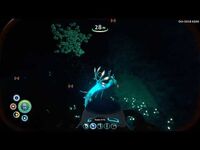 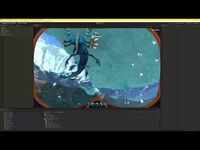 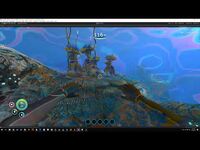 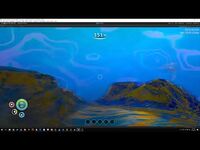