Lilypads are a large flora species that create the unusual landscape of the Lilypad Islands.

In its mature form, the Lilypad sports one gigantic, circular leaf that floats on top of the water's surface. The green leaf has many veins extending outwards from the center. The lengthy trunk of the lilypad hangs in the water, anchoring its roots to a large boulder to stop itself from drifting away.

The lilypad displays a multi-staged life cycle through which it changes drastically.

As of recent updates, Seabases can be built on top of Mature Lilypads on the ocean surface.

The Lilypad is based on real life water lilies such as Victoria amazonica, with its leaves capable of reaching 3 metres in diameter. The ones on 4546B, however, are far larger.

Matured Lilypads on the surface

Various Lilypads from the distance

Close up to its root

The stem of a fallen Lilypad, providing a habitat for several small flora species 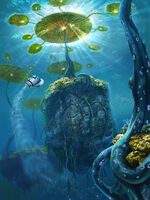 Highpoly model of the top of the Lilypads from Sketchfab

Highpoly model of the trunk from Sketchfab

Highpoly model of the base of the trunks from Sketchfab