When seamonsters are hunting you, you don't hide. You hunt the seamonsters. Then you build a bigger boat out of seamonster bones, and you hunt bigger monsters. Keep going until there aren't any monsters left to hunt you.

Marguerit Maida was a highly experienced mercenary and former member of the Trans System Federation, hired by Paul Torgal to protect the Degasi from pirate raids. Marguerit and Paul didn't get along well and argued often about where to establish themselves. Marguerit wished to go deeper into the sea, but Paul wanted to remain on the Floating Island. In the end Marguerit had her way and they set up habitats in the Jellyshroom Cave and later in the Deep Grand Reef. Paul allowed this to happen because, despite being the captain, he knew that he and Bart needed her to survive.

Marguerit's considerable experience was demonstrated on multiple occasions, once when she wrestled Stalkers and took their teeth by force and again when she brought a nearly dead Reaper Leviathan to their base in the Deep Grand Reef, and was last seen clinging to the Reaper Leviathan responsible for the destruction of that base, having stabbed a jagged piece of metal into its neck.

As it turns out, Marguerit survived these events and later appears in person in Subnautica: Below Zero.

Marguerit, Paul, and Paul's son Bart were the only survivors from the Degasi crash approximately one decade prior to the Aurora's crash. They arrived during a period of torrential rainfall and storms which rendered them stuck within their lifepods for several days. After the storms cleared they were able to see a Floating Island and created a base on it from the scrapped wreckage of the Degasi. They remained on the island until the rainfall caused a landslide which destroyed part of their base. After this they moved to the Jellyshroom Caves where they remained for some months before Marguerit wished to venture even deeper into the ocean in search of the answer to why they were shot down. A base was constructed within the Deep Grand Reef and here they learned that they had been infected by an alien disease. Bart needed specimens to test on and Marguerit would bring him creatures for this purpose. This arrangement continued up until Marguerit brought a near-dead Reaper Leviathan back to the base. Unknown to Marguerit, a second Reaper Leviathan had tailed her back to the base which it then attacked and destroyed. After this Paul swam downwards towards a light, likely dying of oxygen deprivation whilst Bart fled towards the Floating Island and presumably died due to Kharaa some time later. Marguerit's fate remained unknown. She was last seen by Paul, clutching onto the neck of the Reaper Leviathan.

It turns out Marguerit survived the events of 10 years prior came to reside within Sector Zero after the destruction of the Deep Grand Reef Degasi Base caused by a Reaper Leviathan. Marguerit clung onto the Reaper whilst attacking it, eventually killing the Leviathan causing its body to float to the surface. Once the Reaper's body floated to the surface, due to the Ghost Leviathans consuming only planktonic organisms. Marguerit remained on the body of the Reaper (more than likely staying inside the carcass for shelter and consuming it for nutrition), and over a long period of time eventually drifted to Sector Zero. She has a base in a cave below the Lilypad Islands with the skull and mandibles of the Reaper that she killed.

Marguerit and Bart seem to get along, and it is highly obvious that she prefers him over his father. An example of this is when Marguerit planned to leave the Torgals while they were sleeping, take what she needed and go off on her own. However, while expressed relief at the prospect of leaving Paul, she couldn't bring herself to abandon Bart, claiming that he wasn't "so bad." Whether their friendship caused her to stay is unknown. Throughout their time on the planet, their relationship is further explored, with Marguerit capturing specimens for Bart to study. When she found an alien tablet in the ocean she gave it to Bart to study, showing that she trusts him. When Bart realized that they were infected with an unknown pathogen, she took extreme measures to capture specimens for him. Despite their disagreement over her methods, the two shared a friendly relationship.

Marguerit's relationship with Bart's father was tense, to put it mildly. Paul was bullheaded and stubborn, set in his ways and the belief that his way was the only way. But Marguerit often did things her own way and refused to even consider Paul's point of view. An example of this is when she proposed to move to the Jellyshroom Caves, which Paul flatly refused multiple times. She was aware of and chose to ignore Paul's dislike towards her friendship with Bart. She also ignored his frantic reactions to her actions, such as bringing back a severely injured Reaper Leviathan on the back of their Cyclops, as she merely stated Bart needed a "test subject." 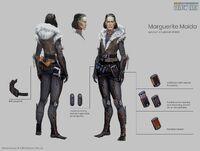