Marguerit Maida's Base is a Seabase built at an unspecified time and occupied by Marguerit Maida, located in a cave below the Purple Vents biome on top of a large rock pinnacle. Entrances to the cave system can be found along the edges of the Lilypad Islands and Tree Spires. The most direct route being to go directly north into the caves from the 'Pilot - Last Known Position' waypoint.

The base consists of two interconnected Large Rooms, one with a Glass Dome roof, and a Moonpool containing Marguerit Maida's Prawn Suit connected by a right-angle section of corridor. The structure overall has a grimy and dishevelled exterior, and a dark and cluttered interior filled with hunting trophies, personal effects and partially dismantled equipment. Entry to the base is via a Bulkhead that separates the Moonpool from the base's interior, and it will be open after the player encounters Marguerit Maida at Delta Island.

Initially, the player is blocked from entering the second Large Room by Marguerit Maida's pet Snow Stalker laying in front of the door. It remains there until the quest to sabotage the Communications Tower is completed. After this, it is possible to enter and scan the Fridge, Shower, Sink and Toilet, as well as pick up a PDA log.

The base's surroundings bleeds into the Lilypads Crevice and Tree Spires biomes, as shown by the nearby Flora and terrain. The area consists of an open cave with a large mound protruding from the floor, which the base is located on. The cave's ceiling is overrun by clusters of Hiveminds and Lilypad Roots, as well as an entrance to the Lilypads Crevice. The sea floor is littered with flora native to the Tree Spires, and near it is an entrance to the aforementioned biome. Multiple Thermal Spires and Tree Spires can also be found around the area, populated by Glowing Coral Shelfs, and Tree Spires Purple Coral. A Data Box containing the Stillsuit blueprint, and a Spy Pengling Fragment can be found located on a terrace below the base.

Several meters left of the area's Tree Spires entrance is a tunnel leading to the Crystal Caves.

The entrance to the base

The base's Moonpool with her Prawn Suit

A closer look at the Reaper skull

View out of the working room's glass roof

The Spy Pengling remains outside her base 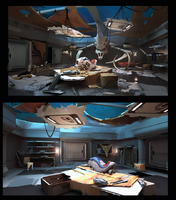 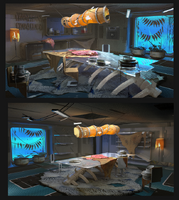 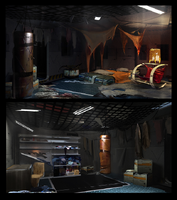 Marg in her base