Mercury II was a human spacecraft that belonged to the Sol Trans-gov that crashed on Planet 4546B. Its wreckage is broken into three sections, with the largest of the three ending up on a downward slope bordering the Purple Vents, Lilypad Islands and Tree Spires, the second-largest in the Lilypad Islands, and the smallest at the edge of the Purple Vents over a crevasse.

A Laser Cutter is needed to explore most of the ship's areas, and the use of a Propulsion Cannon is optional to gain easier access to some rooms.

When inside any of the wreckage, the speed of the player will be significantly decreased.

According to the Favro boards, Mercury II is intended to be somewhere between 30 to 100 years old (most likely 30 based on the P.R.A.W.N. suit mark III fragments) to support the immense amount of rusting and vegetation.[1]

Located within the walls of all 3 segments are sealed cases that contain fragments to the Parallel Processing Unit. Some of them require a Laser Cutter to gain access, although the Stern and Bow contain in total three scannable fragments without the use of a Laser Cutter.

Various crew logs can be found with bits of the backstory - several of which imply that, like the Aurora and Degasi, the Mercury II was shot down by the Quarantine Enforcement Platform and later destroyed on attempted take off.

The stern of Mercury II can be found at a depth of around 100m at the edge of the Purple Vents and Tree Spires, 400m southeast of the Delta Island dock beacon. A Laser Cutter is needed to explore most of the rooms. Spinefish can be found here.

A Reactor Rod inside a sealed supply crate can be found in a room blocked by debris that can be accessed by going to the right through a hole or by using a Propulsion Cannon to move the debris out of the way.

The bow of the ship can be found at a depth of around 250m in the Lilypad Islands, in an area surrounded by Squidsharks. Plenty of Red Feather Fish can be found inside, as well as Lily Pad Roots growing through parts of the wreck.

Accessed through a doorway located in the northeastern side of the wreck or further south through a hole at the top of the wreck. A sealed door immediately to the right of the northern entrance leads to the Alien Containment Room. The stairs in front of the entrance doorway lead to a room with a Wiring Kit and a Power Cell inside supply crates.

Two Reactor Rods can be found in this area. One is close to a rusted Nuclear Reactor, and another one in a room blocked by debris that can be removed with a Propulsion Cannon or accessed through a vent in the Alien Containment Room. A sealed Parallel Processing Unit fragment is found in the latter room as well.

The room directly above the blocked-off room contains a sealed supply crate with Synthetic Fibers in it.

On the third floor, to the south, there's a doorway leading to the Bridge.

The ship's bridge can be seen from the very front of the ship wreck outside, identified by a large window. It is accessed by going up and south from the room with the Alien Containment, or by going through a vent from the ceiling of the cafeteria. It has a Jukebox Disk in it as well as a Parallel Processing Unit Fragment.

A large room housing two damaged Prawn Suits, accessed by cutting through the sealed door above the containment tank in the Alien Containment room, and the two large ports in the side of the room. Right outside the port there's another damaged Prawn Suit.

Two Reactor Rods can be found in sealed supply crates in this room. There's a hole in the middle of the room leading to the Crew Quarters.

This area can be accessed from the P.R.A.W.N. bay by swimming through a hole in the center of the room. The area consists of the ship's cafeteria and a series of dormitories. One of the bunk beds in the dormitories contains a Reinforced Dive Suit.

In the cafeteria there's a Water Filtration Machine to be scanned, three supply crates each containing one Disinfected Water and one Nutrient Block, and a vent leading to the Bridge. A Parallel Processing Unit fragment can be scanned here as well.

The smallest fragment is a detached thruster unit. It is located over a crevasse at the edge of Purple Vents and Lilypad Islands, 1000m southeast of the Drop Pod and 600m East of the Delta Station Dock, at 150m depth. A couple of Cryptosuchus are found nearby, complicating any attempt at entry. The Deep Purple Vents are just below, with a tunnel leading straight to Crystal Caves.

The segment has just two rooms. The player can find a Reactor Rod inside a sealed crate and a Jukebox Disk on the floor. A Parallel Processing Unit fragment can be scanned by cutting through a panel in the second room.

The northern end of the Mercury IIs stern.

The eastern side of the Mercury IIs stern.

The southern end of the Mercury IIs stern.

The western side of the Mercury IIs stern.

A view from above the Mercury IIs stern.

An open bay in the southern end.

A large hole in the hull of the eastern side.

A small hole in the eastern side's hull.

Sealed room with an air pocket.

The northern end of the Mercury IIs bow.

The western side of the Mercury IIs bow.

A large indentation on the northern side.

A torn hole in the roof.

Two open cargo bay doors on the western side.

Middle of the Hallway.

End of the Hallway.

First room to the west.

Second story room up the back stairwell.

First story room to the north.

Stairwell to the second story.

Second story room to the south.

Stairwell to the third story.

Sealed door to the Bridge.

The western end of the Mercury IIs thruster.

The northern side of the Mercury IIs thruster.

The eastern end of the Mercury IIs thruster.

The southern side of the Mercury IIs thruster.

A small hole leading into the segment.
MercuryIIThrusterInteriorEntrance.png
Entrance Hallway.

Large engine to the north.

Eastern wall with a doorway and hole.

A machine with many pipes to the south. 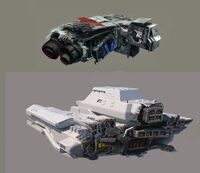 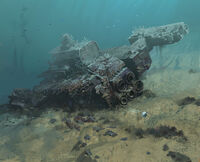 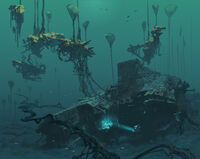