Koppa Mining Site (-294.6 -151.9 -778.3)
The Moonpool is a Seabase module which is constructed with the Habitat Builder. It can be used to recharge, contain, and customize the Seatruck and the Prawn Suit.

The Seabase that the Moonpool is attached to must have power in order to dock vehicles. It can, however, undock vehicles without power. Docked vehicles will be charged from the base's Energy, consuming the base's Energy to restore an equivalent amount of Energy to the vehicle's Power Cells. The rate of charging at a Moonpool is much faster than if one were to use a Power Cell Charger.

It is recommended to have an appropriate amount of space between the bottom entrance of the Moonpool and the sea floor. It should be built far enough so that a vehicle will not crash into the seafloor when it ejects, but close enough so that a Prawn Suit can easily reach the entrance with its thrusters. 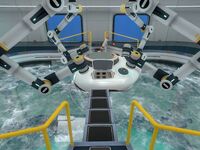 A Prawn Suit docked in the Moonpool

The Vehicle Upgrade Console in the Moonpool 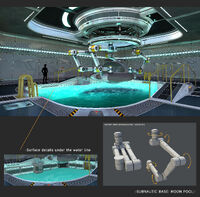