The Oxygen Plant is a large flora species that the player can draw oxygen from to refill 30 points of oxygen. After depletion, it takes 40 seconds for the plant to release the bulb.

The main body of the Oxygen Plant is comprised by a large circular orange core, around which are six large green petals lined with glowing white nodes and notched at the tip. From the orange core several short black stalks protrude upwards, tipped with neon yellow glows. From a small circle in the very center a much taller grey stalk extends with a large semi-transparent green bubble-like structure at the tip, likely the source of the oxygen.

The short protrusions and long stem constantly undulate in the current of the passing water.

When interacted by Robin, the Oxygen Plant deflates and retracts back into the main core.

Oxygen Plant in the Twisty Bridges

In the Arctic Kelp Caves

Closeup of the bubble at the top of the stalk 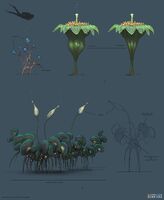 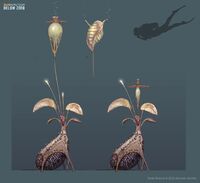