This PDA has rebooted with one directive, to keep you alive on an alien world.

The PDA (Personal Digital Assistant), also sometimes called the Survival PDA, is a multipurpose device that the player keeps with them at all times. The PDA's AI keeps the player informed of their health status and will alert the player when the player has 30 or 10 O2 points remaining, or if the player is getting close to dehydration or starvation. It also gives useful information to the player when they enter new areas or find new materials.

These PDAs were originally designed and produced by Xenoworx before Alterra Corporation purchased the company. In Subnautica, Ryley Robinson uses an Alterra-issued PDA, while in Subnautica: Below Zero, Robin Ayou uses a legacy Xenoworx model.

The various tabs of the PDA allow the player to:

The PDA's inventory tab provides a paper doll interface that allows the player to equip items. The available equipment slots are on the head, torso, feet, and hands, as well as an air tank and two computer chips. Equipment must be placed in a corresponding slot in order for it to benefit the player.

For a complete list of equipment that can be equipped through this interface, see Equipment.

The blueprints tab keeps track of the player's current blueprints and the respective recipes.

In Below Zero, selecting a recipe will pin it to the top-right of the screen, allowing the player to view the recipe at all times even while the PDA is closed. It is possible that there will be a search function for blueprints in the future.[1]

Abandoned PDAs can be found while exploring Subnautica and Below Zero. Collecting abandoned PDAs will download their log messages to the player's PDA. In Below Zero, the player will sometimes also receive calls from other characters through the PDA.

Every databank record the player acquires is saved to the PDA's Databank tab. The AI will sometimes inform the player that a new databank entry is available and occasionally summarize the entry.

For a complete list of databank entries, see Databank (Subnautica) and Databank (Below Zero).

Below are the Subnautica databank entries related to the PDA itself:

The Player booting up the PDA 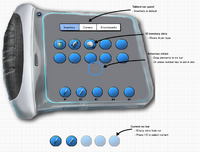 A Concept Art mockup of the PDA UI