The Pengling is a small predatory fauna species and the juvenile form of the Pengwing. They are capable of being picked up by the player, and are the only non-Food creature that can be placed in an Aquarium or Seatruck Aquarium Module. They do not reproduce if placed in an Alien Containment. The player can also place them inside of a bio-reactor for 210 energy.

The Pengling is around half the height of the Pengwing and is almost entirely white, the only visible exception being an orange and blue stripe around the edge of the flipper.

The beak is much less prominent in the Pengling and instead of the Pengwing's blue and green band, has a boomerang-shaped orange and blue marking near the tip. Its eyes are also proportionately larger.

Penglings spend about half their time above water and the other half underwater. When above water, they stay on ice floats or other land areas with a large group of other Penglings and Pengwings and move by hopping around. They are quite unsteady on their feet and will often fall flat on their faces when attempting to move. Occasionally, Penglings will dive headfirst into the water, at which point they will swim around hunting for food. Penglings can be observed attacking and killing smaller fish while swimming.

Penglings that cannot see an adult will start to emit loud, regular cries. They will do this constantly if placed in an Alien Containment, but not if they are in an Aquarium. They will settle back down if placed close to any group of adult Pengwings, regardless of whether or not it is the group they originally came from.

The Pengling is inspired by real life penguins.

A Pengling swimming around the Shallow Twisty Bridges 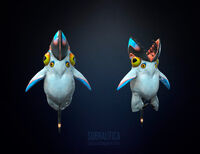 Four Penglings and their parent 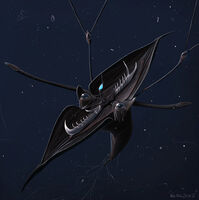 Non-Subnautica art by Alex Ries (2012), appears to have inspired the penguin's mouth