The Pengwing is a small predatory fauna species and the adult form of the Pengling.

The Pengwing has a furry body, white on the chest, and light blue on the back with a yellow bands dividing them. Like many creatures on 4546B, it has two pairs of eyes, yellow in color with black pupils. Though unlike other creatures the eyes face different directions; the smaller pair is front-mounted, offering binocular vision and depth perception, whilst the larger pair is side-mounted, offering a much wider and rotational field of view.

About one third of the creature's height is made up by the huge beak atop its head. This beak opens horizontally rather than vertically, and rows of long black dental spines lie within. The beak is mostly black with a band of green and blue around halfway up. At the base of the beak on either side is a small, respiratory orifice.

There are two long flippers on either side of the body and two rectangular pads with leathery soles for their feet. Two serrated claws are seen on the foot pads, allowing the pengwing to grip the ice. The body ends with a thin black tail with a white band near the tip. The tail retracts when not swimming.

Pengwings spend about half their time above water and the other half underwater. When above water, they stay on ice floats or other land areas with a large group of other Penglings and Pengwings and waddle around, occasionally stopping to stretch their wings and back. Pengwings can be seen diving headfirst into the water, at which point they will swim around hunting for food. Pengwings can be observed attacking and killing smaller fish while swimming.

Pengwings are defensive and will only attack the player if they see them pick up or attack a Pengling, or attack another Pengwing.

If Pengwings are hit by Snowballs, they will shake their bodies.

Pengwings will eat fish in the player's hand.

The Pengwing is inspired by real life penguins. It most closely resembles a King penguin but with more blue.

A Pengwing swimming around the Shallow Twisty Bridges

Details on the Pengwing's foot design and movement - by Alex Ries 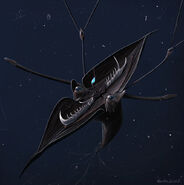 Non-Subnautica art by Alex Ries (2012), appears to have inspired the penguin's mouth

Non-Subnautica alien bird art by Alex Ries (2016), has the same tail design as the Pengwing as well as the same color scheme.

A parent Pengwing and it's offspring in the cinematic trailer