The Phi Robotics Center is an Alterra Base located in a large cave in the Glacial Basin. As the name suggests, the robotics division was located here, and as such, was the birthplace of the Spy Pengling.

At an unknown point in time, the base was destroyed by a cave-in as a result of Sam Ayou's actions.

The Phi Robotics Center is composed of two Large Rooms and a Multipurpose Room, with an extensive network of catwalks found outside. Supply crates, forklifts, and floodlights can be found scattered around the area. Most notably, two Snowfox Hoverpads can be found here as well. An Auxiliary Architect Teleporter can be found to the left side of the cave, having been studied by Alterra. Near the teleporter is a small cave filled with supplies only accessible using a Propulsion Cannon.

The Phi Robotics Center is split into two floors, one lower and one upper. Much of the interior has been bent or outright destroyed by the cave-in.

A large portion of the lower floor is taken up by the robotics lab of Samantha Ayou. Spy Pengling blueprints and concepts can be found along the walls, and a broken Spy Pengling can be found in the far corner of the room, along with a map of Spy Pengling accessible locations. A broken Snowfox in need of repair can also be found here.

The remaining space in the lower floor is used as the bedrooms for Zeta Landon and Samantha. Zeta's bedroom can be found on the left side, and contains notable items such as a poster, a supply crate, a PDA, and the Jukebox Disk for "Diving In Too Deep" by NerdOut. A Cold Suit fragment can be found in her closet.

Samantha's bedroom can be found to the right, and is much smaller than Zeta's room. Due to Samantha's demotion and removal from the base, not much can be found here aside from a PDA entry.

The upper floor leads into more miscellaneous workspace, but is also where Zeta's office and the kitchen are located. This floor has taken considerably more damage than the lower floor.

The Administration office can be found to the left of the hallway, and is where Zeta worked. A motivational poster can be found here, as well as various beverages strewn about the ground.

Past the Administration office is the kitchen, which has suffered the most damage out of any other room in the base. Not much can be found here aside from another poster and a PDA.

A platform found outside the cave

The entrance to the cave

The stash found behind crates

What remains of the kitchen 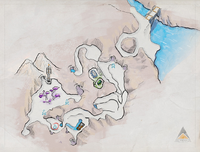 Map of the Glacial Basin