The Pinnacarid is a friendly fauna species in Subnautica: Below Zero A small, intelligent and social predator species that effectively fills the role filled by seals on Earth. They are a predator of small fish and are friendly towards the Player.

Their appearance suggests a distant relation to the Pengwing.

The Pinnacarid has a long, streamlined body with seven pairs of fins that decrease in size towards the tail fin. An additional pair of fins adorn each side of the face, these appear decorative rather than functional.

The head has two pairs of small green eyes arranged that one pair is above the facial fin and the other pair is below. Atop the head are two purple-tipped antennae that can be retracted into the head when the Pinnacarid is hunting. The front and underside of the head and neck are orange and the head ends with a small black beak.

The dorsal side of the body is black and the ventral side white, a common method of camouflage. About one third of the way down the dorsal side there are two, thick orange bands that continue all the way to the tip of the tail.

Pinnacarids spend a majority of their activity underwater, hunting smaller fish. They can be seen attacking nearby herbivores, but remain friendly toward the player. Additionally, Pinnacarids have the ability to traverse between land and water, a behavior observable within either Arctic region.

Any small herbivores that can be found near Pinnacarids can also be fed by hand to them. Holding one of these fish in the player's hand will prompt the Pinnacarid to swim toward the player.

The body shape and general behaviour of the Pinnacarid takes inspiration from seals whilst the many fins are a trait inspired by the Cambrian era predators, anomalocarids.

A Pinnacarid roaring on an iceberg

Pinnicarid on land - by Alex Ries

Pinnacarid variants, C being the one chosen - by Alex Ries

Color variants of Pinnacarid C, A being the final - by Alex Ries 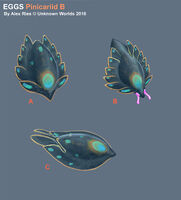 Non-Subnautica "Birrin head sketches" that bear a strong resemblance to the Pinnacarid - by Alex Ries, 2009