A chain of pipes can be used to transport breathable air from a functional pump.

Pumps oxygen from a powered habitat to an attached pipe network.

Floating device that pumps air into pipes. Acts as starting point for a pipe chain.

Pipes and the Floating Air Pumps are crafted by using the Fabricator. They allow the player to pump Oxygen from the surface.

The Base-attached Air Pump can be constructed using the Habitat Builder, which allows the player to pump Oxygen from a Seabase instead of the surface. This may be a more preferable choice for areas too deep to use the Floating Air Pump.

Pipes allow the player to create a network of interconnected Pipes with readily available Oxygen underwater.

The Base-attached Air Pump pumps Oxygen through Pipes from a Seabase without the need to place Pipes at the surface.

A Pipe must be connected to an Air Pump in order to carry oxygen. A player's Standard O₂ Tank will start filling once they swim near an active Pipe.

A Pipe connected to a Floating Air Pump

Pipes connected to a Base Pipe Connector

A network of Pipes

A Pipe refilling the player's Oxygen

Pipes can be placed through the ground

Pipe In-game
Add a photo to this gallery 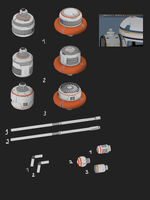 Pipes final model drawing.
Add a photo to this gallery

Model from Sketchfab
Add a photo to this gallery

Retrieved from "https://subnautica.fandom.com/wiki/Pipes?oldid=355194"
Community content is available under CC-BY-SA unless otherwise noted.