Subnautica Wiki
Register
Don't have an account?
Sign In
Advertisement
in: Crafted with Gold, Crafted with Titanium, Constructed with Habitat Builder,
and 2 more
English

View source
watch 02:46
The Quarry - The Loop
Do you like this video?
Play Sound
This article is about Power Transmitters in Subnautica. Click here for information on this subject in Below Zero.

Extends the range of a power source.

PowerTransmitterFragment
The Power Transmitter is a Power module that extends the range of a power source. It is constructed with the Habitat Builder and can be placed on the seabed. It can be damaged and destroyed by striking it three times with the Survival Knife.

A glowing blue line will be displayed between the Power Transmitter and any objects that it is connected to.

Before it can be constructed, a single Power Transmitter fragment must be scanned with the Scanner. The fragments can be found in the Mushroom Forest or in Wrecks.

Two solar panels are supposed to power the base "Base A". In this image the "good" case is illustrated. It was taken right after loading a save and it shows Base A powered by the two solar panels.

Former model of the Power Transmitter 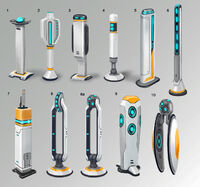 The Power Transmitter's model from Sketchfab