It is normal when first piloting a Prawn suit to feel a sense of limitless power. Prawn operators receive weeks of training to counteract this phenomenon. You will have to make do with self-discipline.

The Pressure Reactive Armored Waterproof Nano Suit Mk.III (abbv. Prawn Suit Mk.III) is a bipedal mechanical walker, designed for use in extreme-pressure and zero-gravity environments. A plasteel-reinforced canopy of enameled glass protects the single occupant, and dexterity is provided by hydraulic limbs that are capable of striking with enough force to crush bone and pulverize rock. When not in use outside of water, the vehicle assumes a seated position.

Lateral movement is provided by mechanical legs that propel the vehicle along the ground at a top speed of 24 Kph. (14 Mph), and a pair of boosters on the back of the vehicle provide vertical thrust. The Prawn Suit also comes with its own beacon, similar to the Cyclops and the Seamoth.

The Prawn Suit can be used to explore places that are too deep for the Seamoth and too small for the Cyclops. It has a base crush depth of 900 meters and can be upgraded to withstand a maximum depth of 1,700 meters, making it the most useful deep-sea exploration vehicle. However, due to its limited mobility in the vertical dimension, it may be wise to use a Cyclops as a transport, as certain biomes such as the Blood Kelp Zone or Underwater Islands may be difficult for it to get out of on its own.

Unless the power supply is depleted, the player's Oxygen tank will be replenished upon entering, as is the case with the Seamoth and the Cyclops. Just like the other vehicles, the Prawn Suit cannot move or function until one charged Power Cell is put on one of the sockets near the back.

The Prawn Suit has a health meter, and reaching zero will cause the vehicle to malfunction catastrophically and explode. Unlike the Seamoth, however, it's heavily armored and can endure most things that would otherwise severely damage or destroy a Seamoth, such as a Reaper Leviathan's grip. The Sea Dragon Leviathan is also capable of picking up the Prawn Suit.

Alternatively, the Prawn Suit can be used on land for exploration of dangerous areas. (Keep in mind that the Prawn Suit is not as mobile on land. The thrusters are nearly useless, even if the Prawn Suit Jump Jet Upgrade is equipped.) As the suit is immune to heat and poison (though not direct contact with lava), the Prawn Suit is also great for collecting resources in hazardous areas such as near Lava Geysers or collecting Gas Pods, or for simple protection against most low-to-mid tier predators.

The Prawn Suit requires energy from Power Cells to operate, which can be interacted with or switched out from the two sockets on either of the shoulder plates. It can be docked in the Cyclops or the Moonpool to recharge.

The vehicle comes equipped with 24-slot inventory space, accessed from outside in the rear. Any items picked up with the default Claw Arm or drilled with the Drill Arm are automatically placed in the Prawn Suit's inventory if there is room. Bear in mind though that there is a slight delay between clicking and activating the respective Claw Arm on the suit, so a player may accidentally punch a creature they are trying to collect or miss a falling item.

The Prawn Suit can be customized with the Vehicle Upgrade Console, which the player can use to craft upgrades and change the vehicle's name and color scheme. Upgrades can be installed and swapped via a panel on its left shoulder. The Prawn must be detached from the Moonpool in order to access this panel. Opening the panel reveals six slots - four for vehicle upgrades and two for arm attachments. The Storage, Hull Reinforcement and Engine Efficiency modules are compatible with the Seamoth.

The Prawn Suit in the night

Size comparison between the player and the Prawn Suit

Suit size scale to Wasabi One model and Seamoth

The Prawn Suit docked in the Moonpool

The Prawn Suit in the Cyclops

A Prawn Suit under construction

A Prawn Suit with a Lava Larva on the glass.

A size comparison
Add a photo to this gallery

Exosuit animations 01
Add a photo to this gallery 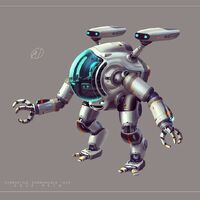 Aqua-Mech A1 - by Pat Presley 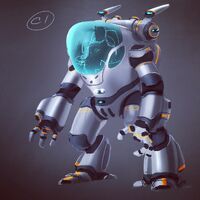 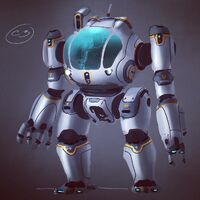 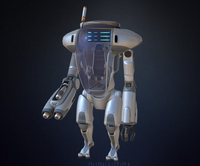 The Prawn Suit with the Torpedo arm, seen in Sketchfab. 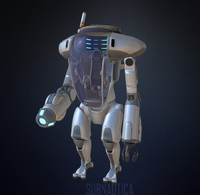 The Prawn Suit with the Grappling arm, seen in Sketchfab. 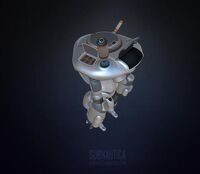 Prawn Suit Upgrade from Sketchfab.
Add a photo to this gallery 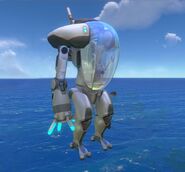 The Prawn Suit with the Propulsion Cannon Arm, seen in Trello.

The Prawn Suit with the grappling arm, and the torpedo launcher arm, seen in Trello.

The Prawn Suit damaged model, as seen on Trello.
Add a photo to this gallery

Retrieved from "https://subnautica.fandom.com/wiki/Prawn_Suit?oldid=355978"
Community content is available under CC-BY-SA unless otherwise noted.