The Primary Containment Facility requires the Blue Tablet to unlock, which is found in the Alien Thermal Plant.

The Primary Containment Facility, like the other Alien Bases, was built a little under one thousand years ago. Five Sonic Deterrent devices can be found in the area around the base, preventing attacks on the facility from the native fauna. It was built to contain the Sea Emperor Leviathan after it was discovered that it was immune to the Kharaa Bacterium. The aquarium section was originally all inorganic with two Alien Arches set up inside, one leading back into the Antechamber's moonpool and another leading to just outside the Quarantine Enforcement Platform. However, as creatures began migrating into it via the Arches, they brought with them flora seeds along with loose sand and mud. Over time, the aquarium became a thriving ecosystem with the Sea Emperor Leviathan at the heart. Five of the eggs that the Sea Emperor Leviathan was found with were placed in the Incubator Device to stimulate the hatching process as it was deduced that the young would be a more viable source of the cure, rather than their parent who was weak. But the aquarium was not a suitable environment for the eggs to hatch which was built to match the ideal environment for an adult Sea Emperor Leviathan, which differ from the ideal conditions for a juvenile Emperor, causing the eggs to go into a form of natural stasis for a seemingly indefinite amount of time, kept alive by the Incubator.

The first room in the Primary Containment Facility. It is huge and roughly octagonal in shape. A large pillar, called the Ion Cube Fabricator, lies in the center of the chamber, which is used to create Large Ion Cube Deposits. Every time the deposit on it is completely depleted the pillar will rise up and, after a while, fabricate a new deposit, after which the pillar will lower back down. Around this pillar are cases containing the Alien Relics, five on each side. There are six doorways around the sidewalls of the Antechamber, the four doors positioned at diagonals lead to Arch rooms, the middle left door leading to the "Pipe Room", and the right to the "Egg Laboratory". Accessed by ramps on either side of the entrance to the facility, another doorway can be seen, this door leads to the "Dissection Lab". At the far end of the Antechamber is another door blocked by a force field that leads to the Moonpool Room, along with its respective Forcefield Control, requiring a Blue Tablet. The Antechamber also has many specimen cases containing artifacts the Precursors collected, most originating from other alien races.

A collection of eleven relics are kept in the Primary Containment Facility, with one of human origin, some of Precursor origin, but most from other, unidentified alien species. Further information on these relics can be found here: Alien Relics.

(for images see gallery) This laboratory is accessed through the middle door on the right side of the antechamber. The purpose of this laboratory was to study the hatching processes of local life form's eggs in order to find out how to hatch the Sea Emperor Leviathan eggs. As such, the laboratory contains many eggs from the local life forms, forty-three eggs are kept here in total, including one Sea Emperor Leviathan egg and two Sea Dragon Leviathan eggs. The unimplemented Shuttlebug egg can also be found in this room.

(for images see gallery) Although this room is not huge, the pipes originating from it cover tens of thousands of meters. This room's purpose is to pump cool, oxygen-rich water from the surface biomes into the aquarium, and remove the oxygen-deprived water, maintaining a stable environment for the Sea Emperor Leviathan. This room also contains five small aquariums that are filled with various coral and flora species, these aquariums have pipe exits in them so are presumably for the purpose of enriching the circulating water with plant and coral matter. The Sea Emperor Leviathan using its telepathic abilities trained Peepers to use the pipe system to distribute Enzyme 42 to the surface biomes, keeping a small amount of life on the planet alive.

Many variants of Flora and Coral can be found inside the aquariums, though they are unreachable through normal means.

(for images see gallery) This small room contains one Sea Emperor Leviathan egg that has been forcibly opened, as well as a dead Sea Emperor Leviathan fetus on a dissection table. Scanning these items reveals that the Precursors were desperate in trying to obtain Enzyme 42 when their attempts to naturally coax the eggs to hatch failed, forcing them to dissect one of the extremely valuable eggs.

A large room accessed through a door at the far end of the Antechamber, the main point of interest in this room is the large Moonpool from which it draws its name. The Moonpool leads to an observation platform above the Sea Emperor Leviathan's Aquarium, suspended by four cables, where the player will come face to face with the Sea Emperor Leviathan for the first time. At the far end of this room is a platform with an Alien Arch on it, the platform cannot be accessed from the Moonpool Room, only being accessible through an Arch in the Aquarium.

The Moonpool Room cannot be accessed unless the forcefield securing the entrance has been disabled, which can be done using a Blue Tablet at a control, located in the Antechamber.

The main feature of the Primary Containment Facility; a huge aquarium containing the Sea Emperor Leviathan and the five remaining Sea Emperor Leviathan Eggs. The Aquarium is teeming with life; schools of fish, coral, grasses, and Flora being scattered all around, some parts of the Aquarium resemble the Grand Reef. There are also small cave systems, one containing a pair of Oculus, the only place they are found other than the Jellyshroom Caves. Large pillars made from the same material as Alien Bases can be found running in two lines, parallel to each other in the middle of the Aquarium, topped with larger, green, rectangular lights. Aggressive creatures, such as Stalkers, Bonesharks, and Cave Crawlers, will be passive to the player and are thus not a threat. Players can safely ride their Seamoth around the aquarium regardless of the depth limit. Two Ion Cubes can be found here, one on a pedestal near the Arch at the back of the Aquarium, and another located in a cavern system having seemingly been abandoned during the evacuation of Precursors.

Eight Alien Vent Entrance Points are located in the aquarium, which pumps oxygen-rich water into the aquarium to keep a stable environment. Peepers use these vents to travel to and from the surface carrying Enzyme 42.

The Incubator Device is found in a large hollow in the ground surrounded by small mounds of rock amongst which the Emperor will nestle itself when the player gets close to the 5 eggs that are on it. There is an Arch directly behind the Incubator, which connects to an Arch near the Quarantine Enforcement Platform. The eggs can be hatched using Hatching Enzymes.

The top of the Primary Containment Facility

The left side of the exterior

The right side of the exterior

One of the five Sonic Deterrents around the Lava Lakes

The Primary Containment Facility from a distance

The entrance to the Facility

The ramp leading to the Antechamber

The Ion Cube fabricator in the center of the room (Outdated)

The ceiling of the Antechamber

An Alien Robot in the Antechamber

The first set of Alien Relics

The second set of Alien Relics

Some doors leading to the Teleporter Rooms

The ramps at the back of the Antechamber

The door to the Moonpool Room (Main Sea Emperor aquarium)

An overview of the Antechamber

The entrance to the Moonpool Room

The ceiling of the Moonpool

The entrance to the Moonpool

An Alien Arch that links to the Aquarium

Details on the wall of the Moonpool Room

The Sea Emperor Leviathan contacting the player upon entering the Aquarium

A view of the terrain in the Aquarium

A cluster of Blue Barnacles

A corner of the Aquarium with a single Sea Crown

A view from the corner of the Aquarium

The Sea Emperor Leviathan swimming around the Aquarium

Another corner in the Aquarium with more Blue Barnacles

Some of the Coral and Flora found here

The only Giant Coral Tube in the Aquarium

Some of the more common Flora in the Aquarium

A large cave in the Aquarium

Oculus in a cave, the only place they are found outside of their natural habitat

An area in the Aquarium's cave containing various Flora

The back of the Aquarium

The Alien Arch at the back of the Aquarium

An Alien Vent in the back of the Aquarium

The Alien Arch behind the Incubator Device

Three cases containing eggs from a Crashfish, a Rabbit Ray, and a Mesmer

Four cases embedded into the wall containing a Rabbit Ray egg, a Jellyray egg, a Gasopod egg, and an Ampeel egg

A large octagonal column with sixteen cases embedded into it, each containing an egg

A Stalker egg and Crabsnake egg in two embedded cases

A Jellyray egg suspended over a tank by a precursor device

A ramp leading to the bottom part of the room

The meeting point of several pipes

Peepers traveling through the pipes

An aquarium on the upper level

A second aquarium on the upper level

A third aquarium on the upper level

A smaller aquarium on the lower level

A larger aquarium on the lower level

The entrance from the Antechamber

Further into the Lab

One of the five tanks

The only tank to contain a Sea Emperor Leviathan Egg

More of the tanks

The Sea Emperor Baby within the center tank 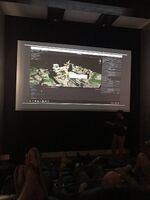 A developer's photo of the early inside of the Aquarium

A developer's diagram showing how the central pillar is animated