Robin Ayou is the protagonist of Below Zero.

Robin is a Xenoworker and Xenologist. She arrived to 4546B with the intent of uncovering what truly happened to her sister Sam Ayou after the Alterra Corporation reported her to have died.

Robin’s hair is curly, dark brown and worn tied back in a long ponytail with cornrows on her head. A blue-dyed streak is present on the left side of her hair, continuing into the ponytail.

Compared to Sam, Robin is much more friendly, thoughtful, and relaxed, though seems to prefer the company of animals over humans. She mentions that she always wanted to be "Scrappier. Faster. Way less play-by-the-rules" than Sam.

Like Ryley Robinson, Robin is in good physical shape, able to swim quickly over long distances and hold her breath for an impressive 45 seconds. She is also a competent pilot of land, sea and aerospace vehicles.

According to Alterra, Robin was the second daughter of an unnamed single mother, and was raised by her along with her sister Sam, who is eleven years older than she was. Robin was home schooled, and had a pet cat named Potato, and developed an extensive interest in alien life.

Events of Below Zero

Due to the fact that Robin was raised solely by her mother, it can be assumed they had a positive relationship.

As her younger sister, Robin very clearly cared for Sam, as she illegally went to 4546B to investigate her death, and they had a strong sibling bond despite their conflicting personalities. They also frequently told each other that they loved the other.

Al-An and Robin seem to be on somewhat positive terms, though Robin was displeased with Al-An forcing himself into Robin's cerebral cortex. Though she does seem to like him enough to name him, and is fully willing to construct him a new body and wants to help him. With time, they become friends, as we can see from their dialogues. When Alan is afraid that his network can no longer exist, Robin gives him hope. Even after Al-An reveals that he was responsible for the Kharaa outbreak on 4546B, she is still committed to help him.

Robin and Marguerit have an estranged relationship. While Robin does not seem to harbor ill feelings towards Marguerit, the latter immediately distrusts both Robin and Al-An, and treats Robin rather poorly, however, after Robin puts the Satellite into Test Mode, Marguerit begins to trust her more. She also reveals key information regarding Sam's death later on.

Robin in the Concept art for the Thermal Lily

Ryley Robinson in Radiation Suit, Stillsuit and All-Environment Protection Suit, another male face concept and two female concepts, one from a poster - by Fox3D 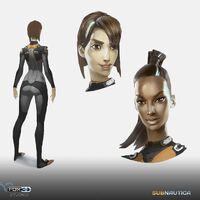 Two Women, the woman on the right being Robin - by Fox3D

A render from Fox3D's Artstation

Robin and Ryley wearing the suit on Sketchfab

Robin on a Snowfox in the official trailer