Ryley Robinson is the protagonist of Subnautica. He is one of the survivors, and later the assumed sole survivor, that survived the impact of the Aurora by escaping aboard Lifepod 5.

Ryley does not serve as the protagonist in Subnautica's standalone expansion Subnautica: Below Zero[1], the role of protagonist being taken instead by Robin Ayou.

Ryley does not typically speak and appears to be taciturn; however, he displays kindness when playing with the Cuddlefish, able to play tricks with it and show it affection, as well as saying goodbye to it when the Neptune Escape Rocket is built. Ryley has also shown the ability to remain calm under pressure and in dangerous situations.

Nothing is known about Ryley's life before the crash of the Aurora; however, he was a member of the Alterra Corporation, as Non-Essential Systems Maintenance Chief, and was on board the Aurora prior to the crash.

Ryley is seen in a hurry, boarding and launching Lifepod 5 during Aurora's descent. After being knocked out by a loose panel, Ryley then proceeds to wake up hours later, (at which point the occupants of the other lifepods are already dead,) and put out a fire inside the lifepod using a Fire Extinguisher. Afterward, he activates his PDA, and the user is able to take full control of him. Upon exiting the lifepod, Ryley unknowingly becomes infected with the Kharaa bacterium.

After curing his Kharaa infection, receiving blueprints for and subsequently building an escape rocket from Alterra, and shutting down the Quarantine Enforcement Platform, Ryley finally manages to escape the planet. Upon returning to Alterra, he is informed that he will not be allowed to land until he settles his outstanding debt of 1 trillion credits. Accrued as, by Alterra law, all materials he used during his survival and escape were property of Alterra.

Ryley as seen in game 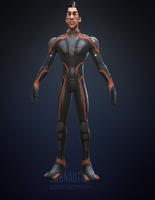