Subnautica Wiki
Register
Don't have an account?
Sign In
Advertisement
in: Candidates for deletion, Story, Twisty Bridges,
and 3 more

We will be lost unless we find a new host.

― Al-An, in response to Robin

Sanctuary Zero is an Architect Base that is located in the Twisty Bridges. It serves as a location for the Architects to transfer their consciousness to during an emergency.

If the player scans an Architect Artifact after recieving the SOS, but fails to download Al-An, they will recieve a beacon marking the location of Sanctuary Zero. The entrance to the tunnel is however 200m to the northeast of this marker, directly beside the data box containing Rebreather

3 Ion Cubes can be found in the corridor leading into the Cube Room. Alien Robots also patrol this area.

The Main Feature of the Sanctuary, the Cube room is where Al-An resides. An Architect Containment Cube containing Al-An's conciousness can be seen suspended in mid-air in the center of the chamber. Located at the back of the room is a small ramp leading up to the Consciousness Transfer Device, which allows Robin to download Al-An's Consciousness.

Shortly after the transfer is complete, the Sanctuary's power completely fails, and the Containment Cube falls to pieces.

Entrance to the Sanctuary

Overview of the Central Cavern

Close-up of the Damaged Bridge

Entrance to the Cube Room

Close-Up of the Cube 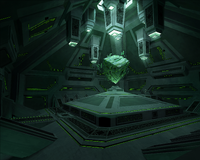 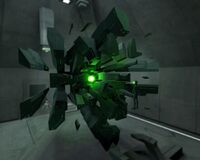 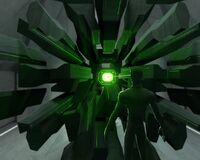 Another view
Community content is available under CC-BY-SA unless otherwise noted.
Advertisement