The Scanner is a tool capable of scanning fragments, lifeforms, technology, flora, the Player's body, and other objects scattered around the map, which get added to the Databank. Fragments are scanned to acquire blueprints; to acquire the blueprints of a particular item, the player must scan its corresponding fragments, the number of which varies based on the object.

The Scanner has a range of five meters. If the player equips a Scanner and points the crosshair at a scannable object in range, a white circle (a progress indicator) appears in the middle of the screen. If the Scanner is not held in the player’s hand and the player has not yet scanned the object, a small Scanner icon will appear in the bottom right of the screen to inform the player.

With a Scanner equipped, the player can hold the correct button to scan their target. It takes about ten seconds to finish scanning, depending on the size of the object. If scanning is interrupted (which can happen if the player looks away or the target moves out of range, for instance), the player can resume scanning later with no loss of progress.

The Scanner requires a Battery to operate, and will be unusable if its battery is depleted.

The Player performing a self-scan 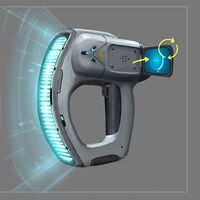