Locates resources and wrecks within range.

The Scanner Room is a Seabase module. It is constructed with the Habitat Builder, and allows the player to generate a 3D map of the surrounding Biome, scan for resources, and conduct scouting via controllable Camera Drones.

Hatches, Compartments, (e.g. Basic Compartment), and Windows can be placed on the Scanner Room.

Four Upgrade Module slots can be found to the right of the camera drone panel, along with a mini-fabricator.

The player must find three fragments to unlock the Scanner Room's blueprint.

If a Scanner Room is constructed in an unpowered Seabase, it will not function.

The Scanner Room has three interactive components: two are parts of a display on one wall, while the other is a Mini-Fabricator on the opposite wall. The display panel incorporates a circular screen, the drone controls, and a menu, the scanner controls. In the middle of the room is a holographic terrain map which displays the local topography as a blue wireframe and the camera drones within the Scanner Room's scan radius as green dots, regardless of whether the scanner is active.

The drone controls are used to operate small remote-controlled camera drones, which can be used to safely explore its surroundings. Drones have an automatic beacon marker like other vehicles, so they can be left in place near a point of interest and used as a waypoint to swim there. If the scanner is currently active, anything it has detected will be highlighted with an orange-yellow circle with a note saying what it is when controlling a camera drone. When built, a Scanner Room has two drones already present in the sockets on its sides.

Interacting with the circular display switches to controlling the first camera drone in numeric sequence, and the player can switch to other drones as they desire. Interacting with the console after doing so previously will default to the last drone the player was controlling. Drones can be controlled from infinite range, but starting at around 300m their view will become increasingly full of static, becoming completely blank at around 600m. It should be noted that scrolling through the list of drones will include the drones of all Scanner Rooms, not just the one the player is currently using: in addition, since the game will always select drones in order, a different Scanner Room will start out controlling the "wrong" set of drones. The range of a drone for purposes of interference with its camera is its range from the Scanner Room the player is currently using, not the one it "belongs" to. Controlling a distant drone can require a fair amount of loading, which is concealed using a "connecting" icon in the camera feed.

Drones have a limited power supply: if they run out in the field, the player will have to manually retrieve them. They only use power while being controlled. Each Scanner Room has two charging sockets for drones, and they can only be charged at these sockets. When controlling a drone, a special beacon will appear indicating the Scanner Room to assist in returning to it. A drone will be "grabbed" by the socket if it passes close enough to it in a similar manner to docking a vehicle to a Moonpool or Cyclops. While docked, the player can look out of the drone's camera, but cannot rotate its field of view.

Drones are usually ignored by animals, but can be stolen by Stalkers who will pick them up and chew on them. They can even grab the drones right out of the charging sockets on the Scanner Room itself. If a drone is damaged it can be repaired with the Repair Tool.

The player can also use the Scanner Room to search for nearby resources, identifying them as orange blips on the central hologram. It has a base scanning range of 300 meters. The scanner can only search for one resource type at a time and has a base scan time of fourteen seconds, during which it uses large amounts of power: the scan proceeds in a radial fashion, detecting outwards from the Scanner Room's location. Scanning is initiated by selecting what to scan for from the menu next to the drone controls: this usually has multiple pages which are scrolled through a page at a time. At any time, the player can choose to abort a current scan by pressing the "X" that appears below the "scanning in progress" message. The scan will continue (and continue drawing power) until it is either manually deactivated or the base runs out of power.

The search speed and range can be increased with the Scanner Room Range Upgrade and Scanner Room Speed Upgrade, which are constructed using the room's built-in Mini-Fabricator and plugged into a set of four upgrade slots next to it. These upgrades can be stacked to improve their effects: four speed upgrades will take the scan time down to two seconds, while four range upgrades will increase the scan range to 500 meters. Increasing the scanning range will also increase the size of the holographic area map the room generates.

The Fabricator also produces additional drones, which need to be taken outside and discarded in order to function, and one other item. This, the Scanner Room HUD Chip, allows the player to see the circles designating items the scanner has detected, which are normally only visible when controlling the camera drones. These circles only appear when the scanner is active, and fade out after a short time when it is turned off. Unlike the other upgrades, the HUD Chip is not equipped to the Scanner Room itself, and instead goes in the chipset slot of the Paperdoll UI.

The Scanner Room actually auto-detects what is inside its search radius when it is built, and the list of items it can scan for will only include what is actually within its search radius. This means that without even turning the scanner on, the player can rule out the presence of any materials that are not on the list. Area permitting, it may give options to scan for Blood Oil, Cave Sulfur, Copper Ore, Crystalline Sulfur, Data Boxes, Diamond, Eggs, Fragments (for Blueprints not yet unlocked), Gel Sacks, Gold, Heat Areas (Lava Geysers, etc), Ion Cubes, Kyanite, Lead, Limestone Outcrops, Lithium, Magnetite, Metal Salvage, Nickel Ore, Quartz, Reaper Leviathans, Reefback Leviathans, Rubies, Salt Deposits, Sandstone Outcrops, Shale Outcrops, Silver Ore, Stalker Teeth, Titanium, Uraninite Crystals and/or Wrecks. It will not detect items inside any kind of Storage, though it does still detect Eggs placed inside an Alien Containment chamber.

Note that any resources that do not normally appear on the ground in single form, such as Titanium or Silver Ore, will be Large Resource Deposits, unless the player has manually dropped some of this resource on the ground within the scanner's range. The scanner cannot identify what is actually inside Outcrops, and so they do not appear when scanning for materials they could potentially contain. In the case of materials like Quartz or Lithium that can be found in both single and Deposit states, the scanner provides no indication of which type a particular "contact" is. In addition, it should be noted that HUD markers for Large Resource Deposits do not disappear even if the Deposit in question has been mined down to nothing.

Upgrades and Uses in Crafting

Interior of the Scanner Room 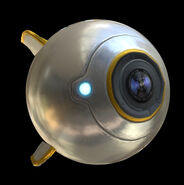 Retrieved from "https://subnautica.fandom.com/wiki/Scanner_Room?oldid=329987"
Community content is available under CC-BY-SA unless otherwise noted.