These eggs cannot hatch due to the Primary Containment Facility being built to match the ideal conditions for the adult Sea Emperor Leviathan, which seem to be significantly different than the ideal conditions for a baby, as a result, these eggs have been in stasis for hundreds of years. The eggs are attached to a piece of Precursor equipment that supplies them with what is necessary to keep them alive.

Ryley Robinson must hatch these eggs to cure himself of the Kharaa Bacterium in order for him to be able to leave the planet. To do so, five plants from various biomes must be gathered to create Hatching Enzymes.

After seven eggs had been laid by the Sea Emperor, the Sea Emperor Leviathan Eggs were taken away from their parent by the Precursors to study them. This is because of the unnatural hatching conditions of the aquarium, and the Precursors wanting to study the eggs, as their parent was incapable of producing a stable variant of Enzyme 42 due to their age, and their deduction that the unborn Sea Emperor Leviathans would be a more viable source.

One of the seven eggs was taken to the egg lab, where it was also tested on, and left in a specimen tank afterwards. The remaining five eggs were placed in the Incubator Device, as the Precursors could not deduce what could possibly make them hatch. Due to the possible relation between Sea Emperor Leviathans and Sea Dragon Leviathans, the Precursors stole a Sea Dragon egg and placed it inside the Disease Research Facility in an attempt to figure out the hatching method. However, due to the parent of the egg tracking the Precursors down, the Sea Emperor Leviathan eggs remained in the Incubator Device. With the presumed extinction of the Precursor Race, the eggs stayed in their state for almost 1,000 years, until their parent telepathically tells Ryley Robinson of what he needs to do in order to hatch it's children, something it could not do with the Precursors. 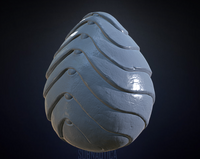