The seatruck is a modular aquatic navigation vehicle. For fun and function, additional modules can be attached to the back of the main cabin — or detached to evade predators.

The Seatruck is a modular undersea vehicle, somewhat resembling a submersible train. It consists of a small cab unit to which various modules can be attached to add additional functions. An unmodified Seatruck has a crush depth of 150m, which can be increased by outfitting it with depth modules.

The Seatruck is an adaptable vehicle that can serve as anything from an agile mini-sub to a mobile seabase. With the ability to detach its front section, it allows the player to haul resources and equipment to an area of interest and then conduct exploration of even fairly narrow spaces without worrying about air supply. It is ideal for exploring the deeper biomes and for getting to places quickly and safely.

It requires Energy to function, with sockets for two Power Cells on the top of the cab module. The vehicle has its own Oxygen supply, and will replenish the player's oxygen unless the power has been depleted. The Seatruck Cabin can be docked in the Moonpool to recharge. When docking, all modules automatically detach to allow the cabin to enter the Moonpool. The player can also manually detach the modules at any time by either going to the roof of a module and pulling it away, or pulling the lever on the left-hand side of the cab.

The Seatruck Cabin has a health meter, and reaching zero will cause the cabin to explode, but leaves any connected modules unaffected. The Seatruck Cabin can take damage from being below its crush depth, being attacked by hostile fauna, or by colliding with terrain or objects. Seatruck modules have individual health meters, though at present the game can only display the health of a maximum of five modules in the main cab display. Damage can be repaired with the Repair Tool, but only from outside. Unlike the main cabin, Seatruck modules are unaffected by crush depth.

Entering and exiting the Seatruck varies depending on its precise configuration and orientation. With just the cab, entering and exiting the vehicle is done using the roof-mounted hatch, and Robin Ayou will immediately take the controls on entering. With at least one module attached that is not the Seatruck Docking Module, the vehicle can be entered from either the roof hatch or the rear door. The Docking Module has no rear door, and instead uses a roof hatch like the cab. However, upon either quitting the game and reloading the save while piloting the Seatruck, or dying and respawning inside the cab, the player will spawn in standing position, similar to how the player would enter the vehicle when one or more modules are attached. This occurs regardless of whether modules are attached to the cab or not.

Entering and exiting both change when modules are attached. On entry, Robin will be standing in the vehicle with the driver's seat folded down, and can walk around inside it or manually take the controls. On leaving the controls, she switches back into this state, and has to manually leave the vehicle via the ladder on the right-hand wall of the cabin, or through the last of the attached modules.

If the Seatruck is at a steep incline upwards or downwards, this behavior is overridden and Robin will enter and exit the cab as if it is disconnected from the rest of the vehicle. The rear door will place Robin directly into the cab at such an angle.

The cab is the only part of the vehicle that has a power supply, and if it is detached, any other modules will act like an unpowered base, with no oxygen generation and the Seatruck Fabricator Module unable to operate. The player also cannot use the Tether Tool to jump to the Seatruck Teleportation Module if the cab is not connected.

The Habitat Builder cannot be used to place objects inside any part of the Seatruck.[1]

Upon entering a Seatruck, the player’s inventory will be secured and items will not be lost in the event of death, regardless of attached modules. The player will respawn in the Seatruck.

Seatruck modules can be attached to the back of the cab and can be linked to each other. Modules have a distinct "back" and "front" and must be connected the right way around. The modules can be controlled to a limited extent by interacting with the grab-bar on the roof at the front of each module, but they can only be moved extremely slowly this way. This is primarily to allow the player to manually re-configure the Seatruck, and can decouple or re-couple the modules. After being detached, a module will have to be pulled some distance away from whatever it was detached from before it will attempt to re-attach.

Modules decrease the overall speed of the cabin when attached. This effect increases as the number of additional modules increases.

The blueprint for this item is unlocked by scanning fragments in the Thermal Spires and the Twisty Bridges, or a single fragment in the Purple Vents. It is crafted in the Mobile Vehicle Bay. 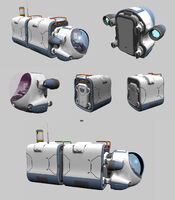 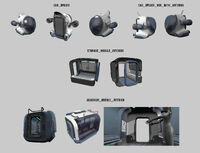 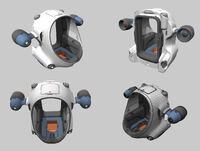